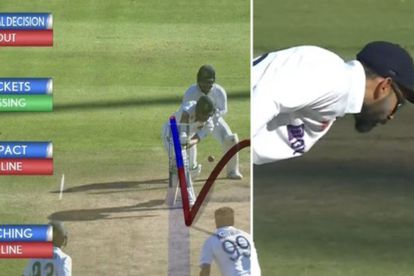 The ICC has decided not to fine Virat Kohli and members of the India team after a stump microphone incident in the third Test at Newlands. Photo: Twitter

The ICC has decided not to fine Virat Kohli and members of the India team after a stump microphone incident in the third Test at Newlands. Photo: Twitter

The International Cricket Council (ICC) has decided not to fine – or even lay a formal charge – against then-skipper Virat Kohli and members of his India team following an unsavoury stump microphone incident in the recent third Test at Newlands.

Kohli and his team-mates have reportedly been spoken to about the Decision Review System (DRS) bust-up on the third day of the Newlands Test by the ICC match officials, although no formal charge has been filed against any player.

ESPNcricinfo understands that the ICC’s match officials had a word with the Indian team management cautioning them about their conduct after DRS had reprieved Proteas captain Dean Elgar from being given out lbw, but there was no official code of conduct breach charge levelled against India.

In the final session of the third day’s play, Elgar was adjudged lbw on the field to Ravichandran Ashwin.

However, Elgar ‘sent the review upstairs’ and the projection from HawkEye showed Ashwin’s delivery going over the stumps.

That led to an outburst by several Indian players, with a visibly annoyed Kohli going up to the stump microphone and seemingly addressing host broadcaster SuperSport, saying, “Focus on your team while they shine the ball. Not just the opposition. Trying to catch people all the time.”

Vice-captain KL Rahul added, “It’s the whole country against 11 guys” while Ashwin seemed to be addressing SuperSport directly when he said, “You should find better ways to win, SuperSport.”

SuperSport were quick to issue a brief statement confirming they had no control whatsoever over the HawkEye technology, but didn’t address Kohli’s suggestion of bias by the SuperSport cameramen only focusing on the opposition rather than the Proteas.

Kohli was no doubt making reference to ‘Sandpaper-gate’ controversy when SuperSport’s cameras caught Australia’s Cameron Bancroft using sandpaper on the ball during a Test at Newlands in 2018.

It appeared as if Kohli was suggesting the SuperSport cameramen were selective in what they were looking for and what was ultimately screened on TV.

The Indian players were not the only ones who didn’t agree with the decision.

Veteran South African umpire Marais Erasmus, who gave Elgar out on the field, could be seen shaking his head as the images were displayed on the screen at the ground, and was heard saying, “That’s impossible”.

Elgar’s reprieve came in the 21st over of the innings with his score on 22 and the Proteas on 60/1, chasing a fourth-innings victory target of 212.

Elgar eventually fell for 30 to what turned out to be the last ball of the day when he was caught behind off the bowling of Jasprit Bumrah with the Proteas’ score on 101/1.

The Proteas returned the following day to wrap up a seven wicket victory to seal the Test and the series by a 2-1 margin.

Virat Kohli stepped down as India Test skipper after the match

Post-Test Kohli said: “I have no comment to make on it [stump pic chatter from day three]. We understood what happened on the field and people on the outside don’t know the exact details.

“For me to justify what happened on the field and say we got carried away is different because if we got charged up and took three wickets, that would have changed the game…

“However, I’m not interested in making a controversy out of it. It is a moment that passed and we’ve moved on from it.”

Kohli also announced his shock decision to step down as India Test skipper following the defeat.