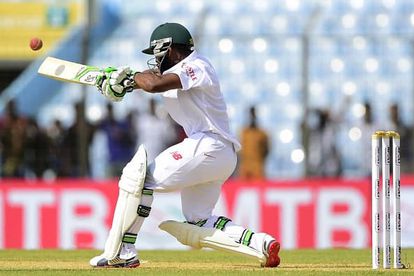 Temba Bavuma joined in the fun of piling the misery on Australia in the fourth and final Test, but he was left stranded on 95* as South Africa were dismissed for 488 in their first innings.

Bavuma returned from a long injury lay off during the third Test in Cape Town – but his contribution was insignificant.

While many backed him to come good at the ground where he has played most of his domestic cricket, he still had a few doubters.

South Africa were already well poised in the match with Aiden Markram setting the tone with a century on day one.

The Proteas were in no hurry to declare, though, with plenty of time left in the match. The lower order pottered along – under Bavuma’s tutelage – and he looked on course to notch up the second Test century of his career.

He dug in his heels – with just one run off 49 balls int he morning session.

With Keshav Maharaj, the pair combined for a 76 partnership, with Maharaj swinging wildly and Bavuma finding his own rhythm.

But Maharaj had one swing too many and was dismissed, with Morkel following soon after and Bavuma was left stranded on 95* – the agony on Twitter was real.

The tension was unbearable…

And, of course Keshav had ideas of his own as everyone waited…

Heh. The way Maharaj is playing, he may reach his 100 before Bavuma does. And everytime Maharaj plays his shot, I'm sure Bavuma has his heart in his mouth.

That brought Morne Morkel to the crease… who is playing in his final Test for South Africa. Needless to say, things were TENSE.

Agggg Maharaj is out .Now Morkel is the one that needs to help Bavuma to get his 100 #SAvAUS

And then… it was all over. Morkel was caught behind and poor Bavuma was stranded. The feels were real.

I blame Maharaj for Bavuma not getting his 100#SAvAUS #Proteas

Temba bavuma, what a player! Gutted for him but still an awesome knock #SAvsAUS

Ao Morkel bathong! How could he do that with Bavuma on 95? All he had to do is survive he didn't have to play that ball at all! Ag retire already #SAvsAUS

But also the praise… Bavuma had a lot of doubters heading into this match.

What a knock from Temba Bavuma, after all the criticism he held it down today. Well done lad @tbavuma10 ???

241 runs added while Bavuma was at the crease. This is what he does.