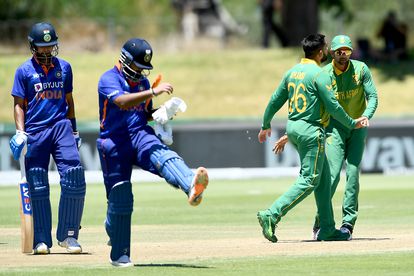 India skipper KL Rahul won the toss and elected to bat in the second ODI against South Africa at Boland Park in Paarl.

On a scorching day, Rahul put the Proteas into the field, and it immediately looked a good call.

Lungi Ngidi was on the money early, but Sisanda Magala, in for Marco Jansen, was far too loose.

Ngidi should have bagged the wicket of KL Rahul, then with eight to his name; however, Janneman Malan put down the tough chance in the gully.

Magala gifted five wides to India on two occasions in his first three overs which were taken for 29 runs in total.

Part-time offspinner Aiden Markram, who opened the bowing in the first ODI, relieved Magala which allowed the Proteas to make it a bit tougher for KL Rahul and Shikhar Dhawan to keep up the scoring rate.

Proteas skipper Temba Bavuma quickly turned to spin in symphony to slow down the India openers, with Keshav Maharaj bowling the 11th over.

Dhawan broke the shackles with a delightful flick over midwicket but got carried away picking out Magala on the square leg boundary with a slog sweep to give Markram the breakthrough. India were 63 for 1.

One brought two as Maharaj drew a false shot out of Virat Kohli to send the India kingpin packing for a duck that left the visitors 64 for 2. Kohli looked to free his arms after Maharaj tossed on up but he drove straight to Bavuma at cover.

A mix-up saw Rahul and Rishabh Pant end up at the same end but Maharaj couldn’t gather the throw.

Pant then decided it was time to cut loose as he got down on one knee and slapped Maharaj over mid on for six.

Rahul and Pant started to take control of the innings though and the skipper would benefit from another dropped catch.

Markram put Rahul down with the India captain on 46.

Pant was the aggressor in the partnership, looking to force Bavuma to take off the spinners.

Rahul would get to fifty despite presenting the Proteas with three chances to remove him and put on a century stand with Pant.

Having moved up the order, Pant stroked his way to his highest ODI career score.

Magala eventually got the breakthrough as Rahul chipped a slower ball to mid on where Rassie van der Dussen pouched the catch.

Tabraiz Shamsi would eventually get Pant just 15 runs short of a century for the wicketkeeper batter. Shamsi had taken some punishment from Pant and gave him an exuberant send-off.

Shamsi got another when he convinced Bavuma to go upstairs and was rewarded with the wicket of Shreyas Iyer.

Another dropped catch denied Ngidi a wicket as the death overs approached as Shardul Thakur looked shaky at the crease.

Sharp work by Quinton de Kock saw Venkatesh Iyer stumped and threatening to derail their efforts to get beyond 300.

Thakur kept up the aggressive intent though as India kept the scoreboard ticking over despite the loss of wickets.

The fourth dropped catch of the innings was the toughest chance as David Miller spilled a diving chance off the bowling of Shamsi.

Thakur and Ashwin would add a few valuable runs for India.