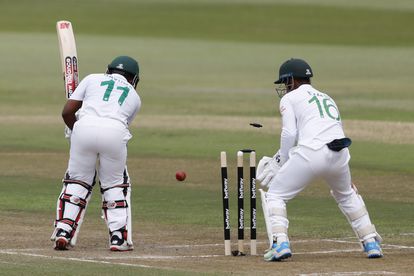 Way back on 2 January 2016, Bavuma scored an unbeaten century against England in just his seventh Test.

He has now just reached his 50th Test appearance against Bangladesh, but has yet to add another hundred to his record, despite boasting 18 half-centuries and an average of 34.

It’s been a painful wait for Bavuma to reach that magical three-figure mark once again, and he looked well on course to finally score that eagerly-anticipated second hundred as he patiently progressed to an impressive 93 at the start of day two at Kingsmead on Friday.

Just as it looked like nothing could stop him from going on to reach 100, a superb delivery from Mehidy Hasan Miraz spun from nowhere, hitting Bavuma on the pads and then deviating onto the stumps.

The elegant right-hand batsman looked understandably devastated, but his innings had nonetheless set up South Africa for a solid first innings score as they headed to lunch on 314/8.

Nevertheless, the 43 Test and 76 innings wait has to continue for Bavuma to reach his second hundred.

FULL LIST: All the players Chiefs, Pirates have recruited!