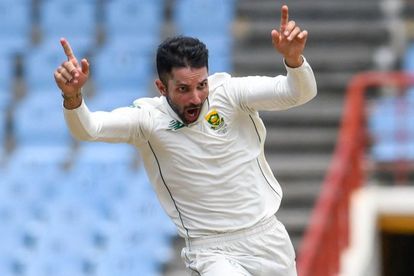 Bangladesh had displayed an immense fighting spirit throughout the first four days against the Proteas, but their batsmen were no match for the twin spin threat posed by Maharaj and Harmer in their second innings.

On Sunday, Bangladesh bowled out South Africa for 204 in the second innings, leaving the visitors a target of 274 to win. Only six overs were possible before bad light ended play but Maharaj and Harmer, sharing the new ball, reduced Bangladesh to 11 for three.

Day five then got off to an almost unbelievable start as Maharaj (7/23) claimed his five-for within the first 11 overs, while Harmer (3/21) continued his wicket-taking heroics after claiming four quick sticks in the first innings.

Only Najmul Hossain Shanto put up some resistance as he scored 26, but only one other batsman reached double figures as the Proteas bundled Bangladesh out for just 53 runs to claim a 220-run victory in the first Test.

Ryan Rickelton and Lizaad Williams had become Test cap numbers 117 and 118, respectively, as they make their Test debuts for the Proteas.

The match also saw Harmer make a sensational return to international cricket, while Sarel Erwee and Keegan Petersen played their first match at their home ground.

You can check out the scoreboard here