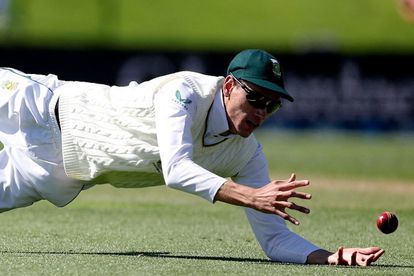 Marco Jansen puts down one of four catches. Photo: Twitter

Marco Jansen puts down one of four catches. Photo: Twitter

After being put in to bat on a bowler-friendly pitch in Christchurch, the Proteas crumbled to 95 all out, their lowest total in the first innings of a Test since 1932.

Although the Proteas did give themselves some hope of rolling through New Zealand after picking up two early wickets, things then started to fall apart.

First Marco Jansen dropped what should have been a regulation catch in the gully, while Zubayr Hamza then failed to make the most of a difficult – but not impossible – chance in the slips.

As New Zealand began to put together a solid partnership through Devon Conway and Henry Nicholls, the latter was also dropped at point by Temba Bavuma – and by his usually high standards, it was a “sitter” that went down.

Finally, just before the close of play, Rassie van der Dussen failed to hang onto a tough grab at short leg after Neil Wagner turned the ball off his hips

In fairness, the fielding was far more disappointing than the quality of bowling, with Glenton Stuurman certainly showing some promising signs on his debut – albeit without taking a wicket.

The Proteas did strike for a third time late in the day when Duanne Olivier bowled the dangerous Conway for 37, leaving New Zealand on 116/3 at stumps.

The Black Caps now already enjoy a 21-run lead, but South Africa will be left to rue their woeful catching and wonder what could have been.

Things had really gone awry for the Proteas right from the outset, though, with Dean Elgar continuing his losing streak at the toss, with New Zealand having no hesitation in putting the visitors in to bat on a seamer-friendly pitch.

As it turned out, South Africa had no answer to the sensational bowling of Matt Henry, who bagged top figures of 7-23 as the Proteas were bundled out for 95.

Zubayr Hamza top scored with 25, while Sarel Erwee made his debut, but could only manage 10 runs.