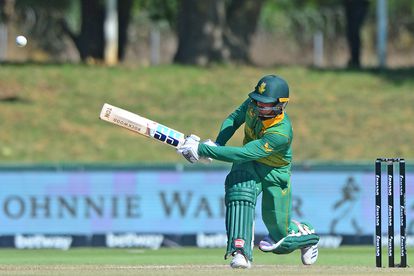 De Kock sensationally announced his retirement from Test cricket earlier this year, and although his presence was expected to be sorely missed by the Proteas, the team responded superbly to claim a memorable 2-1 series win over India.

The recently-concluded ODI series then marked De Kock’s return to action for the first time since becoming the father of a baby daughter, and it looked like a fresh start for the talented keeper-batsman as he was named player of the series, striking 124 in the third ODI at Newlands to end as the highest run-scorer over the three matches.

“If you look at Quinny as a person and when he has freed his mind up when he plays his best cricket,” Boucher told reporters on Sunday.

“It was great to see him play the way he has been playing at his best. He’s got that freedom about his game…”

“It’s great to see Quinny back and smiling again. He’s got a daughter now that he is probably looking forward to get back to and it puts life into perspective as well as many dads will know,” continued Boucher.

“For Quinny, the world is his oyster going forward and hopefully, we can reap the rewards from his more relaxed way that he might be.

“It’s unfortunate that he has retired from Test cricket, but that’s freed him up in the white-ball format.”