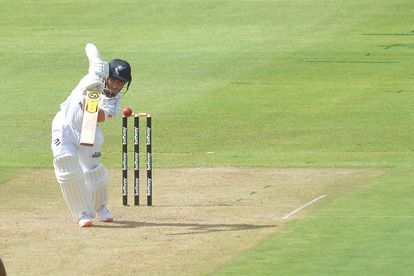 The Lions got an almighty surprise in their CSA 4-Day Challenge match against the Dolphins in the form of a quick-fire hundred from Marques Ackerman.

Staring down an unlikely final day chase, Ackerman was undaunted and came out to play his shots on the final day.

The Lions had offered an attacking declaration in the hopes of making the most of a big first innings lead.

Rain delayed play on the fourth and final day and even the Lions had to feel that the draw was looking most likely but Ackerman had other ideas.

The Lions issued an attacking declaration to set the Dolphins a target of 258 to win their First Class encounter, likely believing it nearly impossible that the Dolphins could get the runs in time.

The 25-year-old left hander, however set to work carting the Lions bowling to all parts of Kingsmead with some innovative and aggressive stroke play.

Ackerman and opener Grant Roelofse made great use of the field and ran well between the wickets, and then after a steady start, the former let loose once Khaya Zondo joined him at the crease.

His ton came at quicker than a run-a-ball and is his second hundred in as many matches.

There might have been fears in the Dolphins camp that the loss of Keegan Petersen to national duty might weaken their great strength, namely middle-order batting but Ackerman and Zondo came through.

A former Under 19 Proteas skipper, Ackerman is a talent on the radar of the national team and after this kind of performance, it wouldn’t be a surprise to see him join Petersen in the Proteas squad.

Dispatching Bjorn Fortuin to the fence to collect the winning runs, Ackermann finished on 139 not out off 127 balls seeing the Dolphins to victory in the 48th over of their innings.