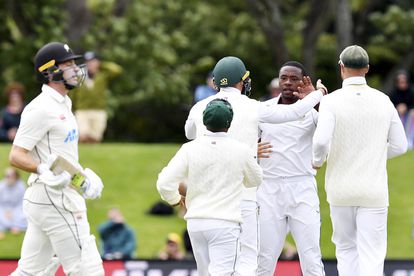 After suffering a humiliating defeat in the opening Test, the Proteas have rocked up at the same venue just a few days later and completely turned their fortunes around.

The opening day of action saw captain Dean Elgar bravely take the decision to bat first on a greenish pitch, but the team responded in fine fashion as various batsmen made important contributions.

Of course, the first innings will always be remembered for the superb century of Sarel Erwee, but plenty of credit also has to go to Marco Jansen (37 not out) and Keshav Maharaj (36) who chipped in down the order to ensure South Africa reached 364.

Once New Zealand came into bat, they were quickly in trouble, with Kagiso Rabada having both openers caught behind as the hosts were reduced to 9/2.

Jansen then claimed a couple of wickets of his own – most notably taking advantage of a fielding and captaincy masterplan as an unfamiliar “fly” third man was put in position, with Erwee ultimately taking the catch to dismiss in-form Henry Nicholls after he fell into the trap.

Rabada then dismissed Tom Blundell with a stunning in-swinger to leave New Zealand in all kinds of trouble at 91/5. However, Daryl Mitchell and classy Colin de Grandhomme (54*) then combined for a rapid fire half-century stand to restore some much-needed stability for the home team, who ended the day on 157/5.

You can see the full scorecard here

In changes that were made for the second Test, all-rounder Wiaan Mulder came back into the side, while Keshav Maharaj also returned. Interestingly, Lutho Sipamla cracked the nod in place of Glenton Stuurman.