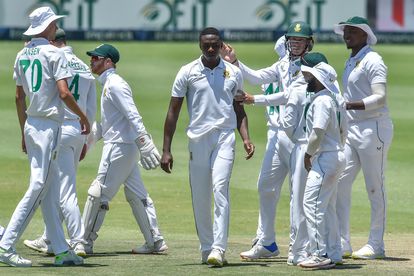 Rabada is undoubtedly the spearhead of the Proteas’ pace-bowling attack, but there have been persistent questions in recent times over an apparent downturn in form.

Besides appearing to bowl with less intensity and ferocity, Rabada’s speed of delivery has seemed to be waning, while he has also struggled with regular no-balls – particularly in the ongoing series against India.

Although the talented 26-year-old still has an immensely impressive Test record of 226 wickets at an average of 22.57, Proteas Test captain Dean Elgar has revealed that an honest conversation was needed to push the fast bowler to rediscover a spark that had been missing at times in the recent past.

As it turned out, there were clear signs of the “old Rabada” when he produced a stunning spell of bowling in India’s second innings, which saw him dismiss the dangerous Ajinkya Rahane, Cheteshwar Pujara, and Rishabh Pant all in quick succession to “break the game open”.

In the end, India were bowled out for 266, with Rabada returning figures of 3-77.

Elgar would go on ultimately inspired the Proteas to a seven-wicket win after producing an unbeaten knock of 96, and has since opened up about his chats with Rabada.

“I was someone who went to KG and I told him he’s an immensely respected cricketer and at the moment, he’s not conducting himself well when it comes to performance,” Elgar said.

“I know what KG is capable of and he is world-class and when he’s got his tail up, there’s no better bowler in the world.

“It was a good chat and I can have those chats with KG because he responds to them extremely well as he packs it away, processes it overnight and comes back the next day with a scenario.

“It was a tough-love conversation between KG and I.”