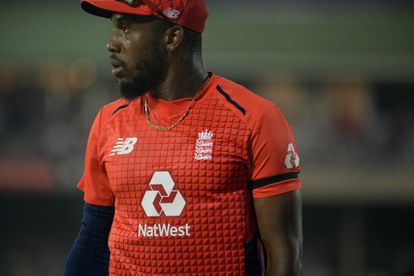 England’s Chris Jordan look on during the first T20 cricket match between South Africa and England at the Buffalo Park Cricket Grounds in East London on February 12, 2020. (Photo by RODGER BOSCH / AFP)

England’s Chris Jordan look on during the first T20 cricket match between South Africa and England at the Buffalo Park Cricket Grounds in East London on February 12, 2020. (Photo by RODGER BOSCH / AFP)

England all-rounder Chris Jordan believes South Africa should not be judged for opting against taking the knee when the two nations square off later in the month.

Proteas coach Mark Boucher revealed earlier in the week that the team will not observe the anti-racism gesture, which has been a big part of pre-match proceedings in cricket as well as sports at large.

‘Proteas should not be judged’

Jordan – one of two black players in the tourists’ camp – was quizzed on the hosts’ stance in virtual media conference on Friday.

The Barbadian-born fast bowler says the Proteas should not be judged for what they have decided.

“I think that a lot of real, honest work going on around the matter will be done in private,” Jordan said. “The real change will come through a lot of those real conversations that you have one-on-one with people, in terms of education. So if that’s what they [Cricket South Africa] as an organisation believe in, then I don’t think it should be judged from any point of view. It’s their personal decision. So let’s just move on.”

How taking the knee seeped into cricket

Cricketers began taking the knee ahead of matches in the wake of the killing of George Floyd, an African-American man whose death at the hands of law enforcement was filmed and sent shockwaves across the globe.

The tragic incident reignited conversation about racism all over the world.

In South Africa, the conversation was brought into the cricket sphere when fast bowler Lungi Ngidi said he would bring up the chat when the team met.

All players involved in a charity exhibition match – the Solidarity Cup – took the knee ahead of the game.

Boucher says Ngidi was happy with the gesture observed in that particular game.

“There are a couple of other issues that our president has raised going forward with regards to gender-based violence and the victims of COVID-19. We are going to be addressing this with the team so if there is a black armband to wear, we will probably be wearing it because of the president’s call.”

The first match between South Africa and England is a T20 International held at Newlands on Friday, 27 November.