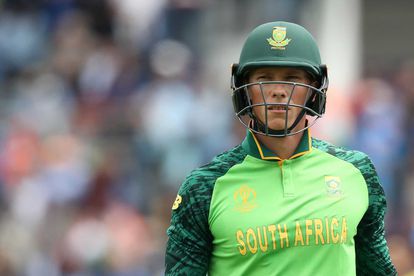 The Highveld Lions batsman was of a few standouts with the bat during what was a woeful campaign for the Proteas, who returned home on Monday after falling well short of making the last four.

Having narrowly missed out of a maiden international century on Saturday’s win over Australia, he finished the tournament with 311 runs – making him South Africa’s second leading run scorer after captain Faf du Plessis.

Rassie van der Dussen the big mover in the rankings

His performance have seen him become the biggest mover in the rankings, shooting up 32 spots to 30th, just ahead of former Aussie skipper Steve Smith.

The 30-year-old is one of four South Africans in the top 30, with captain Faf du Plessis topping the charts at fourth place, having moved there from sixth, while wicketkeeper-batsman Quinton de Kock is the other one in the top ten after dropping four spots to ninth.

Among the bowlers, Kagiso Rabada comes in at fourth place, a spot ahead of Imran Tahir, who called time on his ODI career, alongside JP Duminy.

Van der Dussen noted the gap left by the two departing stars, but expressed faith in the players coming into the setup.

“JP (Duminy) and Imran (Tahir) going away obviously leave big holes, but we’ve got guys coming in,” he said.

“Hash might play another year, maybe not, but we saw Aiden playing today and stepping into that role and playing beautifully.

“The guys coming in will do the job.”

In the team rankings, South Africa are unmoved in third place, while India replaced England, who dropped to fourth, as the top ranked team.