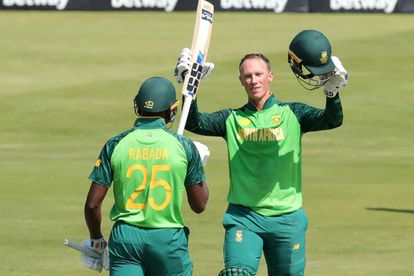 Rassie van der Dussen admits he felt “relieved” after scoring his first international century for the Proteas even though it was in a losing effort.

The 32-year-old struck 123 not out off 134 balls, but could not prevent the Proteas from going down by three wickets in the first of three ODIs against Pakistan in Centurion on Friday.

The hosts, having being put into bat at the toss, were under pressure as they slipped to 55/4 but Van der Dussen’s fine hand saw them reach 273/7.

It was his 48th innings in international cricket, across all three formats, and having made few nineties in his career, Van der Dussen finally hit his ton.

READ | AIDEN MARKRAM GRATEFUL TO BE BACK IN PROTEAS ODI SQUAD

The Lions batsman said after the game: “I’ve been playing for two-and-a-half-years and had a few chances (to score a hundred) and didn’t quite get there.

He said the conditions on the Highveld in early April made it tricky to bat first in the morning and the pitch naturally got easier to bat in the afternoon when Pakistan chased down the target.

Pakistan skipper Babar Azam (103) struck his own century and Imam-ul-Haq 70 to set the visitors on their way on their way but the Proteas bowlers fought back although it was not quite enough.

The tourists eventually clinching victory on the last ball of the game.

Rassie van der Dussen added: “You have to assess conditions and the pitch was a bit difficult with the toss playing a big role.

“On the highveld it’s always difficult in that first hour, hour-and-a-half, because the pitch retains moisture which allows the ball to sit up, it’s a bit two-paced and it’s difficult to hit through the line.

“It’s challenging batting first and you just try and give the team a base that they can capitalise on towards the end. But we lost wickets so our backs were against the wall early on.

“To get to that score was really positive, but the pitch got a lot better, getting flatter and it becomes really difficult to defend, the batsmen can score quite freely.

“I give a lot of credit to the bowlers because normally teams in that situation get home with five or six overs to spare.”

The second match of the three-match series takes place at the Wanderers on Sunday.