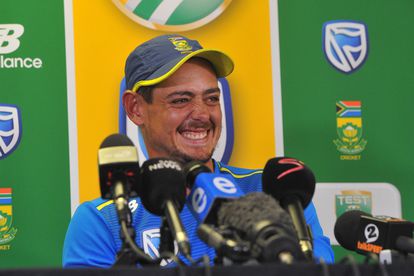 Proteas wicketkeeper-batsman Quinton de Kock “followed his heart” in announcing his shock retirement from Test cricket earlier in the week.

The announcement came mere hours after the Proteas were thumped in the first Test against India at SuperSport Park in Centurion by 113 runs.

De Kock, 29, cited his intention to spend more time with his growing family for the timing and reason for his early retirement from the five-day format.

READ | WHO IS QUINTON DE KOCK? 10 THINGS TO KNOW ABOUT THE PROTEAS STAR

He will remain available for selection in the ODI and T20I format for the Proteas.

De Kock and his wife Sasha are expecting the birth of their first child in the coming days.

KEY TAKEAWAYS: WHAT THE PROTEAS MUST LEARN FROM MEEK DEFEAT!

A quick look at De Kock’s Instagram page shows he’s been working on his golf swing on the Garden Route with rounds at Knysna Golf Club (with South African professional Branden Grace), Simola Golf & Country Estate and the The Links Golf Club at Fancourt among others.

De Kock has also found time to indulge in his favourite pastime: Fishing.

He seizes every available opportunity to take a break from cricket to get out his fishing rod and cast away in the hopes of landing his next ‘big one’.

And that’s exactly what he did on New Year’s eve judging by Sasha de Kock’s Instagram story late on 31 December 2021.

READ | QUINTON DE KOCK: 232 TEST DISMISSALS FOR SA – WHERE DOES HE RANK?

Fishing on what appears to be Knysna Lagoon under the cover of darkness, De Kock reeled in a monster catch!

Here’s hoping he finds the time for more fishing, golf – and some cricket – following the arrival of his new-born in the coming weeks!