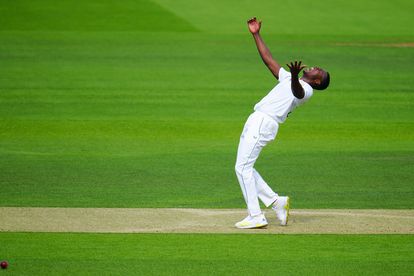 A look at three things we learned from the opening match of a three-Test series between England and the Proteas. Photo: Javier Garcia/Shutterstock/BackpagePix

A look at three things we learned from the opening match of a three-Test series between England and the Proteas. Photo: Javier Garcia/Shutterstock/BackpagePix

South Africa overwhelmed England by an innings and 12 runs inside three days in the first Test at Lord’s.

Below, a look at three things we learned from the opening match of a three-Test series:

Rabada on the road to greatness

South Africa fast bowler Kagiso Rabada took a superb 5-52 as England slumped to 165 all out in their first innings.

His impressive return meant the 27-year-old became the first South African to take five wickets in a Test innings at Lord’s since Vernon Philander in 2012.

It was a classic display by a new-ball bowler, with Rabada removing both openers before polishing off the tail.

“He’s an absolute machine when it comes to rising to the occasion for big matches,” said South Africa captain Dean Elgar.

Since Rabada’s Test debut, against India at Mohali in November 2015, he has taken more Test wickets – 250 in 53 matches at an exceptionally low average of 22.1 – than any other fast bowler in the game.

The most Test wickets taken by any seamer is James Anderson’s 658 from 173 matches, with the 40-year-old England great still going strong.

But Rabada’s chances of getting near that mark have not been helped by the International Cricket Council’s recently published Future Tours Programme, with the Proteas scheduled to play just 28 Tests from 2023-2027.

England opener Zak Crawley’s miserable run of low scores continued as he was dismissed for nine and 13 at Lord’s. He got a good ball from Rabada in the first innings, but the way he was lbw on the sweep to left-arm spinner Keshav Maharaj on Friday looked the desperate act of a batsman trying to hit his way out of a slump.

Only two openers in Test history have a lower average from at least as many innings. Australia’s Alick Bannerman, who played in the 19th century, averaged 21.44, and Bangladesh’s Javed Omar 22.07.

And yet England seem determined to carry on selecting Crawley regardless.

Team management clearly hope an innings to match Crawley’s stunning 267 against Pakistan at Southampton two years ago is just around the corner, with assistant coach Paul Collingwood saying: “We don’t necessarily look for consistency with Zak. It’s about being able to do special things.”

South Africa can get better

South Africa ensured England suffered a first innings defeat in a home Test in seven years without any of the Proteas’ batsmen making a hundred.

Opener Sarel Erwee’s 73 was the lone South Africa score above fifty in a total of 326.

In their most recent 12 Tests, four South African batsmen have scored one century apiece and at Lord’s they also dropped several slip catches.

But that they are still top of the World Test Championship table despite these issues will be a source of excitement, rather than concern, for the team.