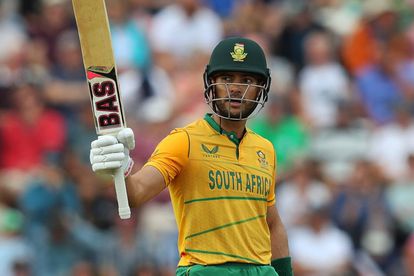 Reeza Hendricks hit his fourth successive T20I fifty as South Africa defeated Ireland by 21 runs in their series opener at Bristol on Wednesday.

Hendricks, who hit three half-centuries in the Proteas’ recent 2-1 series win over England, top-scored with 74 in a total of 211-5 and shared a third-wicket partnership of 112 with Aiden Markram (56).

Lorcan Tucker (78) and George Dockrell (43) kept Ireland in the hunt but when the pair were dismissed off consecutive balls their side’s hopes of victory went with them.

A target of 37 from the final two overs never looked like being achieved, with Proteas’ ‘death-bowling’ specialist Wayne Parnell proving his worth for all he was hit for six off the last ball off the innings by tailender Barry McCarthy as Ireland finished on 190-9.

Reeza Hendricks’ latest fifty came off 32 balls, including seven fours and a six, while Markram got to the landmark in 25 balls including six boundaries.

The pair fell to consecutive deliveries, with leg-spinner Gareth Delany having Markram caught at deep square leg before Hendricks holed out to point.

But Tristan Stubbs – 24 off 11 balls – and Dwaine Pretorius – 21 off seven – ensured the runs kept coming at the end.

The Proteas suffered a setback before the match started, with captain David Miller ruled out by a back spasm, with fellow batsman Heinrich Klaasen taking his place in the XI.

Proteas fast bowler Kagiso Rabada had already been sidelined from both matches in a two-game series that concludes in Bristol on Friday with an ankle injury.