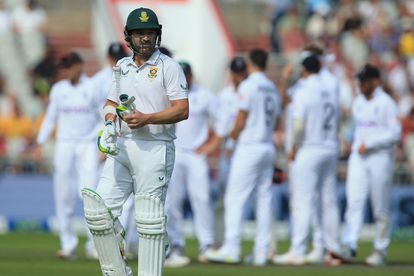 The Proteas came into the third Test against England with the series level at 1-1, but there have been lingering concerns about the team’s batting strength.

Without injured Temba Bavuma, there has been a real vulnerability to the batting lineup, particularly considering experienced men such as Rassie van der Dussen, Aiden Markram and even Dean Elgar have been battling for runs. It can’t be forgotten that the presence of Quinton de Kock down the order is also missed in red-ball cricket.

In seamer-friendly conditions at The Oval, England ripped through South Africa’s batsmen on Saturday, with the likes of Elgar, Sarel Erwee and Kyle Verreynne all failing to make meaningful contributions.

Ryan Rickelton, Wiaan Mulder and Khaya Zondo were the newcomers who also all lacked the experience to perform any kind of rescue job, while it speaks volumes that Marco Jansen was the top-scorer with 30.

There are some serious questions for the Proteas to answer in terms of their batting as they were skittled out for 118, and they now could well face defeat in just three days.

Just to recap, day two of the third Test between England and the Proteas at The Oval on Friday was called off due to the death of Queen Elizabeth II, but it remained unclear whether the Test could be cancelled outright.

Numerous sports fixtures across England were postponed or called off this weekend, but on Friday it was confirmed that the Test between England and South African would resume and pay tribute to the Queen.

Unfortunately play was abandoned on day one due to the extensive rain, and day two was suspended following the death of Queen Elizabeth II.

The ECB and CSA considered whether it was possible to extend the final match of the series by one day but this was unfortunately not feasible due to the Proteas’ current schedule and the imminent departure of the white-ball squad for another two-month tour. The Proteas players have already been away from home for over two months and will have only a few days with families at home before leaving on their next two-month tour to India and the ICC Men’s T20 World Cup in Australia.

The Test squad will arrive home on Wednesday, 14 September as scheduled, with the white-ball squad and the entire team management set to depart for the limited-overs tour of India on 23 September.

CSA CEO Pholetsi Moseki commented:  “CSA is in full support of the ECB’s decision to go ahead with the third Test match between England and South Africa following the UK’s day of mourning. After consultation with the Proteas’ team management and given the schedule ahead, it was clear that it would not be in the players’ interests to extend the Test and reduce the few days the players have with their families before another long tour.”

To commemorate the passing of Queen Elizabeth II, both teams observed a minute’s silence prior to the start of play and each squad member will wear a black armband for the duration of the match.

Notably, Van der Dussen sustained a hand injury while fielding on the opening day of the second Test at Old Trafford in Manchester, and Rickelton now comes into the Test side on the back of a decent run of form for English County Championship team Northamptonshire.