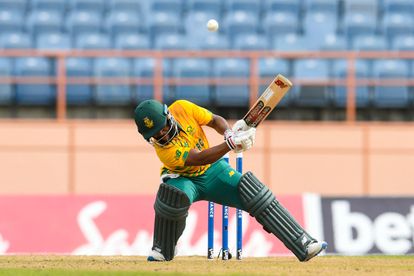 Temba Bavuma and the Proteas will face a key World Cup opener on Monday. Photo: AFP via Getty Images

Temba Bavuma and the Proteas will face a key World Cup opener on Monday. Photo: AFP via Getty Images

Proteas captain Temba Bavuma says he is fit and raring to go as South Africa prepare to launch their ICC Men’s T20 World Cup campaign against Zimbabwe at the Bellerive Oval in Hobart on Monday.

The teams look as follows:

Bavuma has been ill for the past few weeks, forcing him to miss the latter part of South Africa’s tour to India. But he says he is now ready and looking forward to leading the team.

“I feel good,” he told media at the pre-match press briefing on Sunday. “I was out of action the last week in India due to sickness. I’ve come here to Australia still kind of recovering but I’ve gotten over that now. I’ve had a few sessions in the net and I’m feeling good ahead of the next couple of days and weeks.”

The Proteas enter this World Cup on the back of a heartbreaking exit in the previous one in the United Arab Emirates and Oman where they narrowly missed out on a semi-final place due to net run-rate. The skipper said they had learnt some valuable lessons from that experience, one of which was that they had to hit the ground running in match one.

“Probably the biggest takeaway from the previous World Cup is that every game matters,” Bavuma explained. “You want to obviously try and perform as well as you can but make sure that you keep a pulse on that run rate, that net run rate.

“If there’s an opportunity to really go well then make sure that you do so. We have Zimbabwe as our opening game and everything we’ve spoken about in our planning and meetings is to execute as well as we can in that game.

“We want to obviously start on a positive note, we don’t want to ease ourselves into the tournament because there really isn’t any time to do that, so tomorrow is an opportunity for us to execute our skills and our plans accordingly.”

The Proteas have played Zimbabwe six times in T20Is, winning five times with one abandonment. It means they will go into the game as favourites. However, Zimbabwe impressed during the first round of the competition where they qualified ahead of West Indies, Ireland and Scotland.

“As a South African I was happy for our fellow African country, they’ve made it through the qualifiers,” Bavuma added. “They obviously had good performances to get them to this point. They’re definitely a side not to be taken likely so we’ll prepare accordingly as we always do. We’re excited and looking forward to that clash against them.”

The two teams are joined in Group B of the Super 12 stage of the competition by India, Pakistan, Netherlands and Bangladesh, who are up next for South Africa on Thursday.

VIDEO: IS THIS THE GREATEST PIECE OF FIELDING OF ALL-TIME?