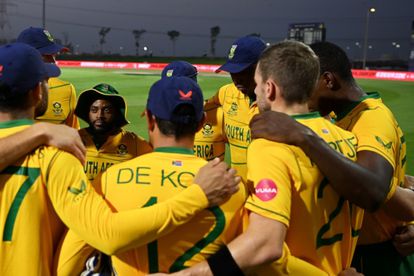 Cricket South Africa (CSA) has confirmed that the Proteas will continue to ‘take the knee’ before matches in the upcoming bumper summer cricket season.

The Proteas will face Netherlands in a three-match ODI series which get underway this Friday, 26 November.

Now, CSA has confirmed an agreement in place with the team captains, players and management for the Proteas to take the knee before their matches.

CSA announced the news in a media statement released on Wednesday night, saying the meeting with everyone involved took place on Tuesday night.

“Following a meeting between a board, led by the chair of the board and team captains and team management last night it was confirmed that the gesture of taking the knee will continue for the forthcoming season,” reads the statement.

“The board had clarified that for the rest of the season the Proteas should continue to take the knee as a contribution towards the global sports endeavour to demonstrate its commitment to eradicating racism and all forms of discrimination,” added the statement.

CSA board chairperson Lawson Naidoo admitted it was important to engage the players and Proteas captains before making this decision whilst he also spoke about the importance of the Proteas taking the knee.

“The decision to engage the players on the gesture of taking the knee was not taken lightly and we are delighted that we had the opportunity to engage with the captains and that this has now been accepted as a matter of principle,” said Naidoo.

“The gesture is an important stance in articulating an unequivocal determination against discrimination in sports and in society, and one in which South African sportsmen and women should be taking the lead,” concluded Naidoo.

The latest developments will be considered groundbreaking after the Proteas made the headlines in the recent T20 World Cup following Quinton de Kock’s refusal to take the knee.

De Kock was subsequently withdrawn from the Proteas team but he was later brought back after apologising and explaining his reasons for refusing to take the knee.

At the time, the Proteas wicket-keeper and batsman said his refusal stemmed from the fact that CSA enforced the decision at the last without proper consultation with the players.

Ga-Rankuwa tavern shooting: ‘I’ve never seen anything like this in my life’