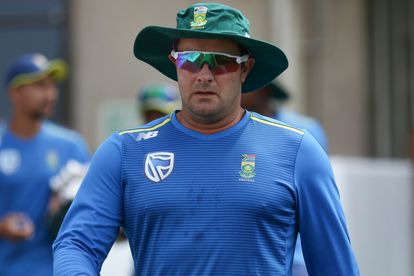 The Proteas have lost eight out of their 11 series in Mark Boucher’s 18 months at the helm with the most recent 3-1 T20 series defeat against Pakistan ending a poor summer.

South Africa only beat a depleted Sri Lanka side in a Test at series at home while they lost series in all three formats against Pakistan.

Mark Boucher said about the poor results: “I take a massive amount of responsibility and I should. I don’t shy away from it.

“I am hurt, I am extremely hurt at the moment, as is the rest of the management and coaching staff.

“We put a lot of hard work and effort into this. But there’s no panic from me yet because I do understand that we have been given some trying circumstances over the last period of time and we will continue to put in hard work.”

The Proteas mentor though was defiant, saying that he trusts in his plans to get things right with the Proteas, especially with a T20 World Cup coming up later this year.

Mark Boucher is only 18 months into his original four-year contract and is confident with the direction the team is taking.

He continued: “We’ve stuck to our guns with what we believe is the right way to go about the set-up. We’ve spoken to the players.

“The players were the ones who originally actually came up with the way that they want to play which is a very nice position for us to be in and we are just going to try and guide them in that direction.

“As I said from the start, there’s a lot of hard work to be done and we are still working very hard in all aspects of our game as well.

“The pressure is going to be there no matter what. When you get to this level in international sport, you must expect the pressure.

“If you can’t handle it, then you need to get out of the kitchen. We understand that the public wants to win. We are sticking to our guns.”