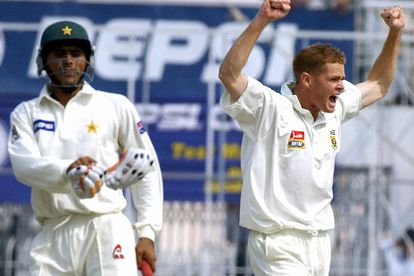 Following the announcement of the ‘Class of 2021’, former team-mates have written open letters to the inductees, with Proteas legend Allan Donald stating that Pollock had been “wonderful servant to South African cricket” in a heartfelt tribute.

Responding to the news over the weekend, Pollock said it was an amazing honour to be included in the Hall of Fame.

“I would like to thank the ICC for this recognition of my career,” Pollock told the ICC.

“It’s an amazing honour to be included in the Hall of Fame alongside the very illustrious company that has already been inducted.

“It’s a real cherry on the top or maybe even a bookend of what has been a thoroughly enjoyable cricketing experience, and I’d like to thank my team-mates who played such a massive part along the journey.”

Below is the full ICC statement on Shaun Pollock’s induction:

The son of former South Africa Peter Pollock and nephew of ICC Hall of Famer Graeme Pollock, Shaun Pollock went on to play 108 Tests, 303 ODIs and 12 T20Is across 13 years after making his Test debut in 1995 against England.

It was with the ball that Pollock was truly special, but as a batter, he stood out as well, managing three centuries in total. Two of those hundreds came in Test cricket, in which he made 3781 runs at an average of 32.31 with a further 16 half-centuries to boot.

His tally of 829 international wickets is the seventh most of all time but to truly appreciate the greatness of Pollock is to recognise his ability with bat and ball.

Few have ever been as complete a player. Testament to that fact is that among players to have taken more than 400 Test wickets, only Kapil Dev (434 wickets, 5248 runs) scored more runs than Pollock’s 3781.

Gloves are off: Bonang vs Mthethwa AGAIN over Banyana Banyana