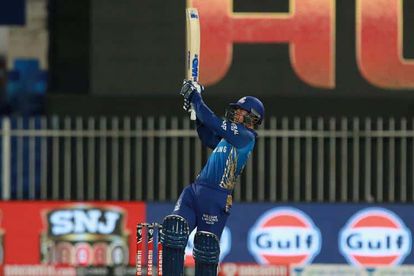 De Kock was instrumental in helping his side, the Mumbai Indians, defend their title and win a fifth IPL title in the past eight tournaments.

De Kock scored 20 runs (off 12 balls) in Tuesday’s final against the Delhi Capitals, a match the Indians won by five wickets.

The 27-year-old De Kock finished the tournament with 503 runs, the sixth-most in the 13th edition of the ever-popular event which was delayed due to the Covid-19 pandemic and played in the UAE this year.

He also took 22 catches, the most by any wicketkeeper in the tournament.

Despite ended on the losing side in the final, De Kock’s Proteas team-mate Kagiso Rabada finished the tournament as the leading wicket-taker.

Rabada’s 30 scalps earned him the Purple Cap award. It was the second consecutive year that a South African had finished as leading wicket-taker after Imran Tahir topped the charts with 26 wickets in 2019.

No South African has ever topped the runs-scorers list in an IPL to date.