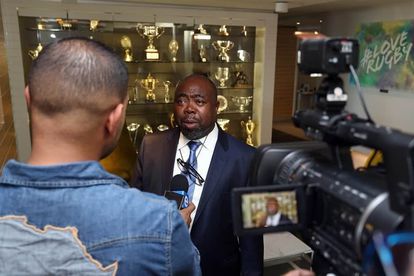 CAPE TOWN, SOUTH AFRICA – MAY 02: Minister of Sport Thulas Nxesi during the Minister of Sport visit to SARU Offices at SARU House on May 02, 2017 in Cape Town, South Africa. (Photo by Carl Fourie/Gallo Images)

CAPE TOWN, SOUTH AFRICA – MAY 02: Minister of Sport Thulas Nxesi during the Minister of Sport visit to SARU Offices at SARU House on May 02, 2017 in Cape Town, South Africa. (Photo by Carl Fourie/Gallo Images)

Not that keeping a lower profile than the previous Minister of Sport and Recreation was an all too difficult task, but Thulas Nxesi has ruffled a few feathers without even sending a Tweet.

The recently appointed Minister on Tuesday had to calm speculation that South Africa could be faced with an Olympic ban.

This after a letter emerged in which he threatens to dissolve the SASCOC executive committee “as a last resort”.

Such action could have bleak consequences on SA sport and could result in South Africa facing an Olympic ban as clause 27.9 of the Olympic Charter states:

“The IOC executive board may take any appropriate decisions for the protection of the Olympic movement in any country of a National Olympic Committee(NOC), including suspension of or withdrawal of recognition from such NOC if any governmental or other body causes the activity of the NOC or the making or expression of its will to be hampered.”

The issue relates to the ministerial committee recently set up by Nxesi to investigate SASCOC. In a letter seen by TheSouthAfrican.com, addressed to SASCOC president Gideon Sam, the minister expresses his concern over poor governance and its negative impact in sport in general.

According to Nxesi, Sam and several board members have not been complying with SASCOC’s Constitution and mismanaging to funds to “fight personal legal battles”. All while not providing justifications for the dismissal of certain members holding key positions among many other things.

Sam welcomed this inquiry, saying it will result in them focusing on their mission to present Team SA at major games.

“His inquiry is welcome. We will cooperate with the commission,” Sam said.

In another letter, addressed to IOC president Thomas Bach, Nexi talks inform the governing of the inquiry into the SASCOC board but assures that his office does not intend to interfere with administration, but rather an effort to “ensure the smooth running of the organization”

In response to this, IOC deputy director general Peter Miro warned against any interference and asked for clarity regarding some of the allegations raised.

The Citizen first reported the story over the weekend, suggesting that there might be some concerns over government interference. However, on Tuesday afternoon, the Minister’s office released the following statement:

The Minister wishes to make the following points:

When Nxesi assumed office in March this year, he promised to make it his mission to tackle poor governance in sport. He lifted the bidding ban imposed on SA Rugby and Cricket SA by his predecessor, Fikile Mbalula. South Africa is currently bidding for the 2023 Rugby World Cup.