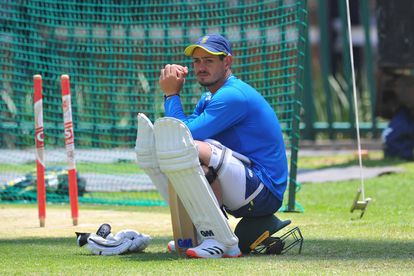 De Kock dropped a bombshell hours after the Proteas were thumped by 113 runs in the first Test against India at SuperSport Park in Centurion.

With the second Test starting at De Kock’s old stomping ground, the Wanderers, on Monday, 3 January at 10:00, it now appears a foregone conclusion that Kyle Verreynne will don the gloves.

KEY TAKEAWAYS: WHAT THE PROTEAS MUST LEARN FROM MEEK DEFEAT!

The Proteas’ line-up was lacking in experience before De Kock’s shock retirement.

Now it’s even more fragile – something that wouldn’t have gone unnoticed by Virat Kohli’s men.

READ | WHO IS QUINTON DE KOCK? 10 THINGS TO KNOW ABOUT THE PROTEAS STAR

Those 54 Tests place De Kock 20th in the all-time list of Tests played for South Africa and he was the second-most capped player in the current set-up (behind Dean Elgar with 70).

In terms of all-time wicketkeeper dismissals in Test cricket, De Kock finds himself in 12th place with 232 (221 catches and 11 stumpings) and was the highest ‘active’ player on the list until his sudden retirement.

His 2.367 dismissals per innings is the highest of all time in Test cricket.

READ | QUINTON DE KOCK: 232 TEST DISMISSALS FOR SA – WHERE DOES HE RANK?

In contrast, Verreynne has played just two Tests for his country – both against the West Indies in the Caribbean in June 2021 – scoring 39 runs with a highest score of 27 at an average of 13.

He has taken two catches to date.