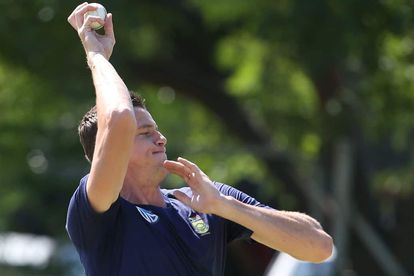 ‘Morras’ or ‘Lobster’, as he is affectionately known, hadn’t played a Test since January last year and had not been part of the national set-up since July, when a persistent back injury cast him into the wilderness; medical advice at one point almost spelling the end to his cricketing career.

But in Dunedin, amidst the persistent background noise of pissed students presumably cutting classes, the lanky Morkel returned reasonably tidy figures of 24-6-62-2. It might have not been so convincing, however, with his wicket of Jimmy Neesham igniting controversy as he appeared to overstep (a common Morkel issue), but the third umpire adjudicated it a fair delivery.

Perhaps his most significant contribution to the match was him endearing himself to the young crowd by answering their call to knock back a vessel of liquid, albeit not anything resembling the amber nectar which filled their bladders.

But as I sat there in the wee hours following his progress, I did wonder if bringing 32-year old Morkel back into the Test fold was really the right thing to do. Sure, he has been a wonderful servant to the Proteas, with 470 international wickets. Sure, he is a wonderful foil to whoever is bowling from the other end, what with his height, bounce, unpredictability and at times, searing pace. Hell, there have been times when even his fielding has been that good for a man of his wax palm-like build, that he has had an impact on games in that department.

But do the names Duanne Olivier (24 years old), Dwaine Pretorius (27) and Marchant de Lange (26) not mean anything to the selectors? Even the name Chris Morris (nearing 30) could be in the frame for a run, with the ever-inconsistent Wayne Parnell (27) perhaps just needing a string of matches to find the sparkling potential he showed in his international cricket infancy.

I just wonder if by bringing Morkel back into the fold it is sending the wrong message to the battery of pace bowling options at the Proteas’ disposal. And that message is that you will be picked on your reputation of past performances and not on whether you will necessarily be the right fit for the team.

Now I am not for one minute suggesting that Dale Steyn needs to be jettisoned when he is back to full fitness; he is far too world-class a bowler to be thrown to the scrap heap. Plus he is the spearhead of the attack, whereas Morkel was not.

I think we have to admit at some point that if we don’t think Morné could play Tests for the next 2 years, it might be high time to give a younger buck the ball and let Morkel see out his career in the ODI team.