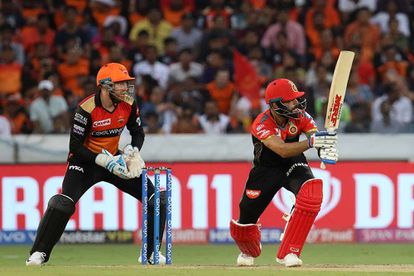 The Sunrisers Hyderabad are now under the care of World Cup-winning coach Trevor Bayliss, and the Australian influence on the Orange Army.

Mitchell Marsh, David Warner and Billy Stanlake bring to three the number of Australian’s in the Sunrisers squad. Warner and Marsh come into the IPL match-ready having competed in the limited-overs series against England.

Warner is almost certain to feature in every game for the franchise, fitness permitting given the slight number of specialist batsmen in the Sunrisers Hyderabad.

Another guaranteed Sunrisers starter should be skipper Kane Williamson. He gets his first taste of a bio-bubble with New Zealand yet to restart professional cricket.

Young Indian batsmen Priyam Garg and Virat Singh will be expected to pull their weight in the Sunrisers cause. Still, the middle order could be backed up by the brilliant Afghan allrounders Rashid Khan and Mohammed Nabi. However, it’s unclear if both will get the nod with Jonny Bairstow, Warner and Williamson already making up three of the four overseas selections.

The Royal Challengers Banglore equally will have some task picking four of their eight overseas professionals on any given day. Australia’s Adam Zampa comes into the series looking to be among the best leg-spinner’s in white-ball cricket at the moment but his skipper Aaron Finch didn’t bag the kind of runs he would have hoped for in England and he might be the one to miss out on the opener.

AB de Villiers and Virat Kohli have renewed their bromance to the delight of social media, but the pair need to be all business when the IPL starts if they are to propel RCB to the IPL title they crave.

Moeen Ali and Chris Morris are purported to be the solution to RCB’s balance issues. Morris is a rocksteady T20 franchise bowler who can clear even the longest of boundaries when he is striking it sweetly as a lower-order batsman.

It’s tough to see where Isuru Udana will get a game from, but the Sri Lanka allrounder could be the surprise package of the IPL.

The wicketkeeper question for RCB comes down to a choice between veteran India gloveman Parthiv Patel and young Australian Josh Phillipe.

Veteran Proteas seamer Dale Steyn will also want to complicate the overseas professional question for RCB, and prove he can be useful to the Proteas at the 2021 T20 World Cup.

RCB’s young player to watch might just be India allrounder Washington Sundar. At 20-years-old the spin-bowling Jack of all trades already has 21 IPL appearances to his name to go with 23 T20I caps for India.

In an early tournament match, a par score at the Dubai International Stadium might be closer to 175 than the average score in T20Is at the venue which is 144.

Anything more than 180 will take some chasing even if the dew becomes a factor.

Sunrisers Hyderabad vs Royal Challengers Bangalore: Start time and where to watch

The match starts at 16:00 with SuperSport’s dedicated cricket channel joining the feed from the UAE at 15:25.

Streaming is available through the DStv Now app (Premium subscribers only). Highlights and video clips are available from IPLT20.com.