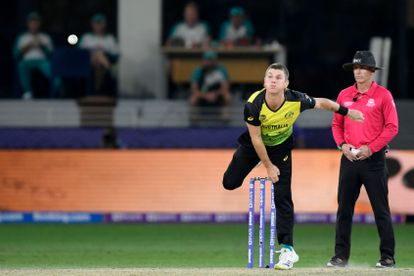 Australia won the T20 World Cup 2021 as Mitchell Marsh and David Warner hit half-centuries to chase down 173 with ease at the Dubai International Stadium.

Marsh and Warner’s brilliant knocks came after New Zealand captain Kane Williamson had responded to losing the toss with a classy innings of his own, with his 85 off 45 helping the Black Caps to 172/4.

But Australia started the chase well and rarely took their foot off the gas as they raced to the World Cup title with eight wickets and seven balls to spare, sparking jubilant celebrations in the UAE.

Australia had lost skipper Aaron Finch early when he top-edged Trent Boult to Daryl Mitchell in the deep.

But the in-form David Warner got off to a decent start, while it was Marsh who upped the rate most spectacularly early on, smashing 14 runs off the first three deliveries he faced.

With Warner and Marsh still at the crease, Australia reached 43/1 at the end of the Powerplay.

And the pair went through the gears as the spinners came on, adding 39 runs in the following four overs to leave them needing 91 from 60 to win the T20 World Cup at the halfway stage of the reply.

It was said before the match by New Zealand skipper Williamson that the final would come down to individual contributions, and so it proved, with two of Australia’s top four delivering on the biggest stage in the run-chase

First it was the irrepressible Warner who smoked Jimmy Neesham for six in the 11th over to reach his half-century off just 34 balls.

Boult was brought back to try and break the partnership as it edged towards a century-stand, and the left-armer did the trick, bowling Warner for 53.

But Marsh ensured the pace of the innings didn’t slip after Warner’s departure, providing a defining contribution of his own.

Marsh reached his half-century three deliveries quicker than his team-mate to set a new record for the fastest 50 in a T20 World Cup final, and finished on 77 from 50.

Click here if the live scores do not load.

Few predicted this would be the final line-up, doesn’t mean the players didn’t believe. And Aussie skipper Aaron Finch was in boisterous form on precisely that topic in his media conference on Saturday.

“I’m not surprised one bit,” he said. “I think we came here with a really clear plan to win the tournament, and we still feel as though we’ve got the squad to do that.”

Add to that the qualities of Adam Zampa, who has taken 12 wickets in the tournament so far – more than any other bowler to enter at the Super 12 stage – and it’s little surprise that this is a squad who have been able to beat higher-ranked and higher-fancied outfits.

The term ‘higher-fancied outfit’ has rarely, if ever, been used to describe Kane Williamson’s New Zealand… even if it should be.

The cliches flow thick and fast in conversation about the Black Caps. They’ve “flown under the radar” and come up on the rails as “dark horses”, but naturally you can “never write off” New Zealand. It’s language that almost goes hand-in-hand with this extraordinary era of Kiwi cricket. But it does so for a reason.

And Sunday’s all-Antipodean clash in Dubai represents a chance for Kane Williamson and his boys to cap off a stunning calendar year by finally adding a white-ball trophy to the cabinet, where it will sit alongside the World Test Championship mace. Many will bet against them once again, but you’d be brave to do so.

Adam Zampa, Australia: The leg-spinner has been a key part of his side’s run to the final and will play a key role against a New Zealand side who aren’t averse to going after slower bowling. If he can continue his terrific record throughout the tournament it will put pressure on the Black Caps to take on the high-quality seamers.

Martin Guptill, New Zealand: The Kiwi opener didn’t fire against England, but his side will be looking for him to get them off to a flier at the top of the order against Australia, particularly given the safety blanket of Conway in the middle-order has been removed. Guptill has the game to take down Australia’s attack, can he do it on the biggest stage?

The injury to Conway means New Zealand will be forced into making a change. Tim Seifert is likely to come in as wicketkeeper, with the bowling-heavy balance unchanged, although the loss of the reliable presence of Conway in the middle-order could potentially see an additional batter brought in for stability.

Kane Williamson, New Zealand captain: “I think ultimately the side has been operating well as a collective and certainly playing for each other. You know, obviously we saw a pretty exciting semi-final. Both semi-finals actually were somewhat similar, where you do see moments in games that are match-defining, and you see games that can take quite a sharp turn when you have some key performances.”

Aaron Finch: “We came here with a clear plan to try to win this tournament. We always felt as though we’ve got the depth of the squad and the quality in our squad to put ourselves in a position to do that. And New Zealand, they have been in every final for a long time now in ICC events. They are a great team over all three formats of the game.”

What time is Carte Blanche this Sunday?

Carte Blanche this Sunday: How a syndicate is using social media to recruit children as drug mules – WATCH