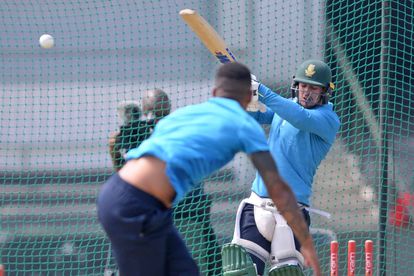 South Africa will bat first in their first T20 International (T20I) against England at Newlands on Friday. This is after the visiting captain, Eoin Morgan won the toss and elected to bowl.

England are in the country for a limited overs tour, which begins in the Mother City on Friday with the first of three matches in the shortest format. The two nations will also play another three One Day Internationals (ODIs) before the world champions jet back to London in December.

In what is the first international cricket match held in South Africa since March, opening batsmen Quinton de Kock and Temba Bavuma will be the first to have a dig at the Newlands pitch.

The match also marks a return of former skipper Faf du Plessis, who was rested when the two nations did battle in coloured clothing earlier in the year.

The one significant change in the Proteas XI is the inclusion of debutant George Linde, who pairs up with Tabraiz Shamsi as the two spinners in the team.

The left-arm spinner is the sole all-rounder in the South African team, with Andile Phehlukwayo and Dwaine Pretorius both not available.

Another notable absentee is fast bowler Anrich Nortje, with Kagiso Rabada, Beuran Hendricks and Lungi Ngidi spearheading the bowling attack as far as pace is concerned.

Left out of the England XI is speedster Mark Wood, with the Curran brothers forming half of the pace attack, which includes Chris Jordan and Jofra Archer.

‘We can do without Russia’: France seeks full gas reserves

‘An act of revenge’: Tweeps put Kwesta’s ‘side-chick’ on blast