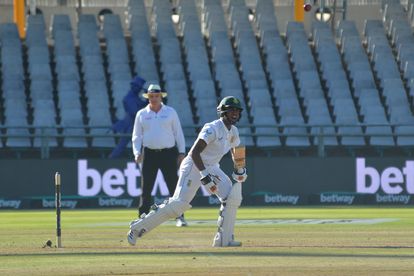 A fruitful partnership between skipper Dean Elgar and Keegan Petersen put the Proteas on top heading into day four of their decisive third Test against India.

The Proteas had earlier bowled India out for 198 to leave themselves 212 runs to get in the fourth innings of the match.

Proteas in a strong position going into fourth day

Marco Jansen took four wickets and Kagiso Rabada and Lungi Ngidi chipped in with three each.

Ngidi got the crucial breakthroughs after lunch with India looking dangerous when Rishabh Pant and Virat Kohli were together.

Kohli nicked off to Ngidi and soon after Ravichandran Ashwin followed.

While Pant went on to notch his fourth Test century he couldn’t get India past the 200 mark but the Test still looked to be very finely balanced at that point.

Aiden Markram was positive in his approach to the chase but tested his luck one too many times and nicked off to Mohammad Shami to leave South Africa 23 for 1.

It could have gone awry for the Proteas after that but Dean Elgar would dig in and share a vital second wicket stand with first innings hero Keegan Petersen.

Petersen hit 72 in the first innings and took a blinder of a catch on the third morning to remove Cheteshwar Pujara and he took the lead when it came to keeping the scoreboard moving.

Elgar and Petersen clawed their way past 100 with just the one wicket down and looked like they might get to stumps with no further damage until Jasprit Bumrah struck in the final over of the day.

India were denied the wicket of Elgar earlier in the innings after a review but would bag the skipper with the help of DRS, which detected a slight edge down the leg side.

Kohli courts controversy as he rants into stump mic

South Africa remain well-placed on 101 for 2 needing 111 runs to win the match and clinch the series. Petersen will resume on 48 not out and should be joined by Rassie van der Dussen.