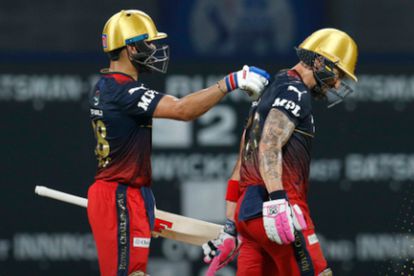 Bangalore crashed out of the lucrative T20 tournament on Friday after going down by seven wickets to the Rajasthan Royals after England’s Jos Buttler hammered an unbeaten 106 chasing a target of 158.

The wait for the elusive first IPL trophy continues for Bangalore, but Manjreker believes the men in red can take plenty of positives from their campaign.

Kohli stepped down from the captaincy before this season’s tournament with Faf du Plessis taking over having been bought in the auction after several years with Chennai Super Kings.

Speaking on ESPNCricinfo, Manjreker said: “RCB have had a slightly better season. Some good things have happened.

“Faf du Plessis has looked like a better leader than Virat Kohli. But more is expected of them. Having come this far, they should have won.

“They’ll know exactly what has gone wrong and what has prevented them from going on to win gold instead of bronze.”

He added: “A lot of credit around the bowling unit has to go to Faf. That’s where we see the captaincy at its best.

“More often than not, he got it right. He started the season well with the bat but, like a lot of other players, he too had a split season.

“Still, he’s the right option to continue as captain according to me.”

Rajasthan Royals will now take on Gujarat Titans in the IPL final to be played in Ahmedabad on Sunday, 29 May.