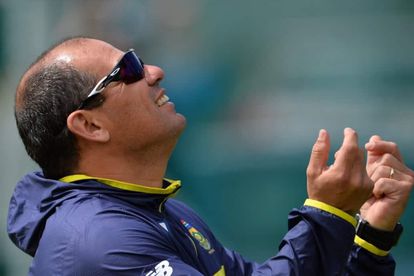 The team has had a relatively good run of results across most formats in the past year, after a nightmare 2015, especially in Tests.

The Trent Bridge win was a massive achievement given the battering at Lord’s a few days prior, and that was without strike bowler, Rabada. Captain Faf du Plessis’s return gave the team not only a tactical genius steering the ship but someone who engenders a hard-nosed edge to all under his leadership.

So why do I feel that it’s time for coach Russell Domingo to go?

Well, for a start, let’s face some cold truths: most of the above-mentioned victories have come against feeble opposition. The normalised results, taking into account the opposition at the time, have actually been sub-standard.

Australia’s Test team was carrying a lot of dead wood, and we effectively beat their B-Team as they rested all of their frontline bowlers in those ODIs last year and threw in some club net bowlers.

Sri Lanka would have been beaten by the local pub team. Seriously, what an insult sending that rabble on an international tour! And barring a pair of brain fade sessions by the hosts in Wellington, we were almost rolled by the Kiwis.

Every other time we’ve faced performing teams, such as England in South Africa and India in India, we’ve been hopelessly outclassed and set a bunch of undesirable records, including losing our once-glossy away record.

The current series in England has yielded hugely inconsistent results…again. Some might say that the only thing consistent about the Proteas, is their inconsistency! The hammering at Lord’s yet again exposed obvious wounds that had been plastered over by the hollow victories.

Our Test ranking of second is, in reality, more an indication of other nations going through recent hard times than the absolute long-term pedigree of the Proteas: we have been the second-best house in the worst street.

And despite the ability of players at his disposal and the best opportunities since perhaps the turn of the century, he has also failed to deliver a major ICC trophy in limited overs, something for which his predecessors were unceremoniously shown the door.

Domingo’s contract is up at the end of this tour, but he has applied to remain. But by offering his job to tender, CSA has ostensibly admitted that he has had four years to prove he is more than an assistant coach like he was under Gary Kirsten; some assistants simply cannot make the transition to Head Coach and he has given further weight to that axiom.

In short, he is not the right man to lead the Proteas further.

So before the rot sets in, it’s time to shake hands and thank him for his hard work, but give a new leader the keys to the kingdom. Not necessarily an autocratic leader, but someone who has a kliphard vision for the team and is prepared to make the tough decisions – especially on selection – to achieve that vision.