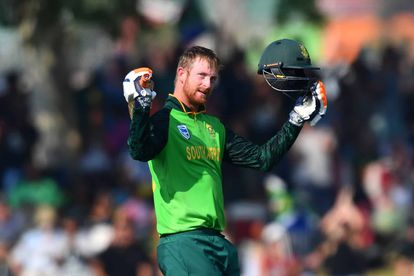 READ | AIDEN MARKRAM GRATEFUL TO BE BACK IN PROTEAS ODI SQUAD

Klaasen arrived at the wicket with his team in a spot of bother at 43/3 after 7.5 overs following the fall of skipper Temba Bavuma.

The 29-year-old Klaasen then proceeded to take 19 balls to get off the mark which was the joint second-most deliveries in South Africa’s ODI history.

Klaasen tied Peter Kirsten (v Australia in Port Elizabeth in 1994) and Morne van Wyk (v India in Belfast in 2007) for second slowest to get going.

Only Loots Bosman took longer – 20 balls – against India at Newlands in Cape Town in 2006.

Heinrich Klaasen was eventually (mercifully?) dismissed for ONE off 21 deliveries with the score on 55/4 after 14.2 overs as Pakistan won the opening ODI by three wickets.

The second ODI will be held at the Wanderers on Easter Sunday.

The first delivery is scheduled to be bowled at 10:00.