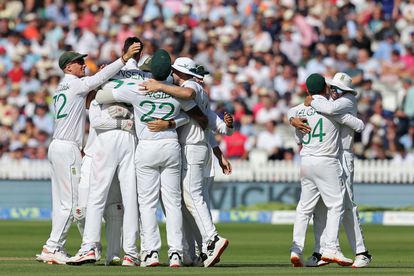 The Proteas celebrate their success against England in the first Test. Photo by Adrian Dennis/AFP

The Proteas celebrate their success against England in the first Test. Photo by Adrian Dennis/AFP

The Proteas thrashed England in their first Test at Lord’s, winning inside three days by an innings and 12 runs to go 1-0 up in their three-match series.

Robinson is set to make his first Test appearance since the final Ashes fixture in Hobart in January.

Meanwhile, the Proteas are almost certain to name an unchanged team for the second Test starting on Thursday Old Trafford.

Speaking at his press conference in Manchester on Wednesday, England captain Ben Stokes said the selection of Robinson was partly due to conditions.

“Ollie gets the most bounce out of our attack and we think generally at Old Trafford that with it being a slightly quicker wicket it offers bounce.

“We all know the quality of bowler Ollie is because when he has played for England before his skillset is incredible. Against South Africa for the Lions, he bowled long spells, three or four spells in a day, and took wickets as well. I am very excited for him to put the England shirt on again. It’s something he has worked very hard for and thoroughly deserves.

“Ollie’s form wasn’t letting him down, it was his body and that is a tough thing to deal with. But, where he is now, I think he can look back on that and use it as something to gain experience from.”