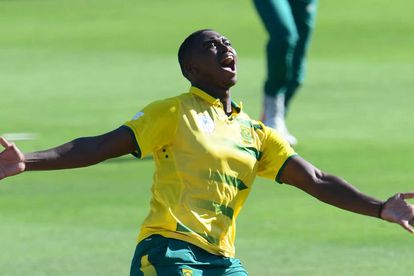 JOHANNESBURG, SOUTH AFRICA – JANUARY 22: Lungi Ngidi of the proteas celebrates the wicket of Kusal Mendis of SriLanka during the 2nd KFC T20 International match between South Africa and Sri Lanka at Bidvest Wanderers Stadium on January 22, 2017 in Johannesburg, South Africa.

JOHANNESBURG, SOUTH AFRICA – JANUARY 22: Lungi Ngidi of the proteas celebrates the wicket of Kusal Mendis of SriLanka during the 2nd KFC T20 International match between South Africa and Sri Lanka at Bidvest Wanderers Stadium on January 22, 2017 in Johannesburg, South Africa.

The Sri Lankans snuck meekly away from the Wanderers, tail between legs, having been subjected to their own version of lbw; lost, beaten, walloped. Their skipper Angelo Matthews admitted as much, and I’m sure former Proteas’ coach Graham Ford, now the islanders’ mentor, would have been fuming underneath his usually unemotional face.

The two teams’ next assignment was a 3-game T20 series, one for which the home team had already picked a severely depleted squad, partly with the aims of blooding a number of youngsters and simultaneously resting their top charges. While it might have presented an opportunity for the visitors to salvage some pride from the tour, everyone and their dog knew that even a 3-0 T20 clean sweep against the Proteas would be as hollow a victory as the 1st team putting 15 tries past the U14D team.

Which brings me to my main argument in this article…is there any bloody point to international T20 cricket? Surely, if it is to maintain any value on an already cluttered schedule, it should remain in the custodianship of the domestic competitions, where it has thus far prospered globally.

One only has to look at the Sri Lankan itinerary, as they move on from the Republic straight to Australia for a T20 series only, which is potentially shaping up to be nothing short of a farce. Most of Australia’s top cricketers and coaching staff will already be popping the Immodium while negotiating the dustbowl nets in India, preparing for what is going to be an interesting Test series, particularly if India clobber Australia, as South Africa could move further up the Test rankings to second. But I digress.

What international T20 cricket has shown us is that top teams are using it as an opportunity to give a few fresh faces a run, knowing that a T20 cap comes at a far lower price than a Test or ODI cap. One could almost argue that it is not too far away from South Africa’s controversial quota system; it virtually says to the new player, “You’re only getting a gig because of circumstance, namely that our regular oke needs to put his feet up and these matches will be forgotten about before the sun comes up the next day.”

All this T20 international circus does is cheapen international honours as there were guys in the Proteas’ team last week who – with all due respect, as this author hasn’t come close to playing professional cricket (!) – clearly wouldn’t be good enough to tie AB de Villiers’ bootlaces, even with permission.

It’s time to keep T20 cricket on the domestic circuit only, with perhaps a T20 World Cup the only international form of the game.

Lotto and Lotto Plus results for Saturday, 23 July 2022