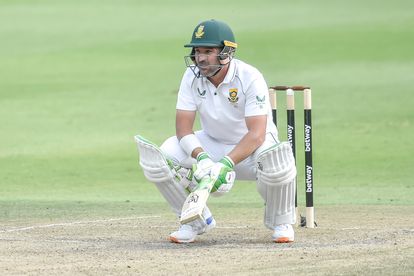 Proteas skipper Dean Elgar says that the Test squad need to spend some time pondering what went wrong in Manchester.

England walloped South Africa by an innings and 85 runs to emphatically level the series at Old Trafford.

With middle order batter Rassie van der Dussen ruled out, Elgar’s playing XI for the decisive will feature at least one change.

“A few tough decisions will be coming our way,” Dean Elgar said after the match.

“With Rassie ruled out, we have to replace him. That’s a definite. Whether that’s the only one we will make … we’ve got a few days. We’ve got nearly two weeks. We’ll go away and get our options and try and get better combinations.

“The bottom line is we need runs from that middle order and that is letting us down quite a bit, to be frank and bold and honest. That’s the truth. As much as guys don’t want to hear it, they know that already. But for now, Rassie’s position has to be filled. Whether that’s the only spot, we are not sure just yet.”

Elgar insists that he will stick to the captaincy style that has worked for him up until now.

“I won’t change my way or my approach, that has been pretty sound and unique,” he said.

“If I do that now, I will be doing myself an injustice and I will be letting the team down. The guys enjoy the honesty. They understand where they stand with me and it creates an honest platform among the other players.

Elgar also said: “I will have a few days off now and go back to the drawing board and dissect and have a look at where we could have been better. We’ll sit down and have those chats again. It’s an adult environment. I don’t want to treat a guy like a school kid. That’s not my way. I wouldn’t have liked that when I was a younger player but we will definitely have a few chats.”

The third and final Test between England and South Africa will take place at the Oval in London from 8 September.