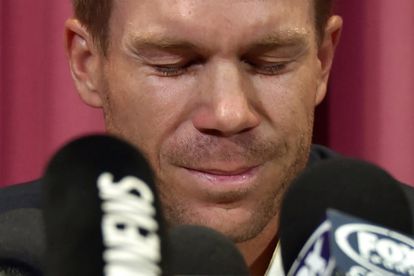 Australian cricketer David Warner attends a press conference at the Sydney Cricket Ground (SCG) in Sydney on March 31, 2018, after returning from South Africa.
Former Australia vice-captain David Warner apologised in tears on March 31 for his role in a ball-tampering scandal and said he would weigh up an appeal against his 12-month ban. / AFP PHOTO / PETER PARKS /

Australian cricketer David Warner attends a press conference at the Sydney Cricket Ground (SCG) in Sydney on March 31, 2018, after returning from South Africa.
Former Australia vice-captain David Warner apologised in tears on March 31 for his role in a ball-tampering scandal and said he would weigh up an appeal against his 12-month ban. / AFP PHOTO / PETER PARKS /

If you feel like there are some unanswered questions over David Warner’s role in the ball-tampering saga that marred the recent series between South Africa and Australia, you’re not alone.

While all players have spoken – and apologised – in teary media interviews, lots of questions remain.

Warner, who emerged as one of the key figures in the scandal, is reportedly planning to address some of those concerns… and lining up a nice payday to boot.

While his wife, Candice, said she “blamed herself” in part for what went down, David is apparently going to spill the beans.

Australian media reported on Tuesday that the firebrand batsman is in talks with lining up a massive $1 million interview to shed light on what happened.

Warner spoke to the media on Sunday, but didn’t say much and on Tuesday, journalist David Penberthy told radio station FIVEaa in Adelaide that it might be because of a PR plot.

“It’s worth noting that he had the high profile Sydney PR woman Roxy Jacenko with him on the day sitting with his wife Candice at the press conference,” Penberthy said.

Warner’s income has taken a big hit as a result of a ban and scandal and there is media speculation that the interview is a part of a plan to “recoup” some of those earnings.

He has lost sponsorships from LG, Ascis and Milo in the wake of the scandal.

Following his interview on the weekend, with many fans still confused, Warner Tweeted:

“I know there are unanswered questions and lots of them. I completely understand. In time I will do my best to answer them all. But there is a formal [Cricket Australia] process to follow.”

While the cricketer’s union has called for bans to be reduced, Warner’s camp has not yet confirmed whether they will.

The Daily Telegraph reported that Warner could call his teammates, coaches and team staff to back him up during hearings and that transcripts of the interviews conducted during CA’s investigation will be requested.

According to Fairfax media, it is unclear whether Warner’s team will be given access to all the transcripts or just his own interview with CA head of integrity Iain Roy.

There are some questions about the thoroughness of CA’s investigation, claiming that Roy may not have conduct interviews with all players and staff.