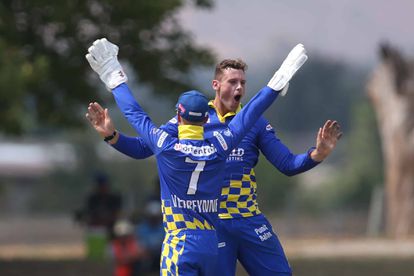 George Linde of Cape Cobras is congratulated by Kyle Verreynne of Cape Cobras for getting Morne van Wyk of Dolphins wicket during the 2019 Momentum One Day Cup match between Cobras and Dolphins at Boland Park, Paarl on 22 February 2019 © Shaun Roy/BackpagePix

George Linde of Cape Cobras is congratulated by Kyle Verreynne of Cape Cobras for getting Morne van Wyk of Dolphins wicket during the 2019 Momentum One Day Cup match between Cobras and Dolphins at Boland Park, Paarl on 22 February 2019 © Shaun Roy/BackpagePix

Cape Cobras coach Ashwell Prince has thrown his backing behind two of his star players who raised their hands for Proteas selection in the opening rounds of the CSA 4-Day Series.

Wicketkeeper-batsman Kyle Verreynne and all-rounder George Linde have both earned national colours, and have raised their stock in the past year.

Both players excelled in their respective Proteas debuts, as the 23-year-old gloveman made 50 in his first One Day International against Australia earlier in the year. Linde, on the other hand, bagged a four-wicket haul in a losing cause for South Africa who lost by an innings to India in his only Test to date.

Prince believes each can offer a lot to the national cause in formats where neither has featured.

The 66-Test veteran believes Verreyne could bat at six in Test cricket.

“I’ve been saying for a while that I think there is place for both Kyle Verreynne and Quinton de Kock in the Test match format of the game,” he said.

“It’s a little bit harsh just to consider Kyle as just a wicket keeper batsman. If you go on pure career stats, Kyle averages over 50 in career franchise 4 Day cricket, which puts him probably as one of the top 6 batsmen in the country in terms of stats. For me, if you’re one of the top 6 batsmen in the country in career stats, it technically brings you into the equation for the top 6 batsmen in the Test lineup, alongside a guy like Quinton de Kock,” Prince said, according to the official Cape Cobras website. “He has started the season nicely for us, passing 50 three times out of four innings. I’m sure he would have liked to convert on a couple of those occasions, but he has also come in when the team was in a tough position and has simply run out of partners, which hasn’t helped him reach the three figures.”

How the Cape Cobras duo fared in the new season

Verreynne has reached 50 in three of his four innings in the 4-Day Series, while Linde already has 11 wickets to his name, plus an unbeaten half-century.

According to Prince, the left-arm spinner could be considered as a white-ball option.

“He was last season’s domestic MVP by putting in consistent performances in all competitions, so right now for me, considering South Africa’s white ball options, with the T20 World Cup on the horizon, I think he is probably best placed for me as a 2nd spinner who can clear the boundaries quite comfortably. His batting has come on leaps and bounds the last couple of years, he has scored centuries in the 4 day competition last season and he has been used as a number 3 for the Cape Town Blitz in T20s, and we’ve utilized him at 3, 4 and 5 for the Cobras in 50 over cricket – he has been entrusted with a lot of responsibility with the bat. For me, he becomes a very strong candidate for the Proteas in white ball cricket.”

Both players have been named as part of the limited-overs side that will face England later at home later in the month.