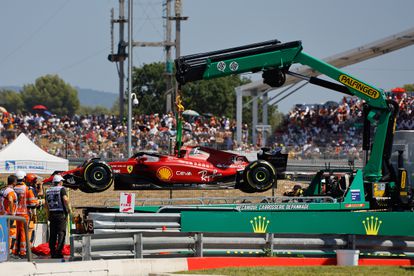 Ferrari’s Charles Leclerc has admitted that he was at fault after he spun out of the French Grand Prix.

Leclerc looked to be in position to close the gap to Max Verstappen in the Driver’s championship but lost control of his car while leading.

Charles Leclerc takes it on the chin

Leclerc lamented the errors which have cost him in his pursuit of the championship.

“A mistake — my mistake,” said Leclerc.

“I think I am performing at the highest level of my career, but if I keep doing these mistakes then it is pointless to perform at a very high level.

“I am losing too many points. I think seven at Imola, 25 here — because honestly we probably were the strongest car on track today — so if we lose the championship by 32 points at the end of the season, I will know where they are coming from.

“It’s unacceptable. I just need to get on top of those things.”

Leclerc said he will review the incident to see if there was anything he could have done differently.

“I go through the same process all the time, try to analyse everything and today the snap was a bit of a weird one,” he said.

“So, I’ll look into the data and try to understand if there is anything that I do not know yet, but to me it is a mistake and that’s it.”

Verstappen expressed sympathy for his rival but said that it is the nature of racing.

“I’m sorry for Charles, but it is easy to make a mistake,” said Verstappen. “It can just happen. I’m sure we will have tough weekends to come, too.

“Of course, it was unlucky for Charles and I hope he’s ok. From there onwards, I just did my race, looked after the tyres because here, with the pit lane being so long, you couldn’t do another stop.”