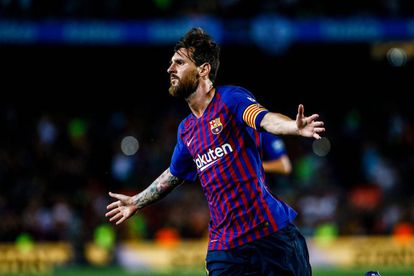 Leo Messi from Argentina celebrating his goal during the La Liga game between FC Barcelona against Deportivo Alaves in Camp Nou Stadium at Barcelona, on 18 of August of 2018, Spain. (Photo by Xavier Bonilla/NurPhoto/Sipa USA/RealTime Images)

Leo Messi from Argentina celebrating his goal during the La Liga game between FC Barcelona against Deportivo Alaves in Camp Nou Stadium at Barcelona, on 18 of August of 2018, Spain. (Photo by Xavier Bonilla/NurPhoto/Sipa USA/RealTime Images)

Supersub Roberto Firmino sealed a last-gasp win for Liverpool over Paris Saint-Germain in a dramatic start to Group C of the UEFA Champions League at Anfield.

World Cup winner Kylian Mbappe thought he’d completed a comeback job in the closing minutes on last season’s finalists, who had shot into a two-goal lead thanks to Daniel Sturridge and James Milner.

But the Brazilian picked out the bottom corner to snatch three vital points for Jurgen Klopp’s side.

Red Star Belgrade earned a goalless draw with Serie A side Napoli in the group’s other opening match.

The little maestro curled in a beauty of a free kick ahead of Ousmane Dembele’s solo effort, before notching in his second and third at the Camp Nou.

Goals from Mauro Icardi and Matias Vecino sealed a dramatic win for Inter Milan against Tottenham in the other Group B game at the San Siro.

Atletico Madrid came from behind to beat Monaco in their Group A opener.

Samuel Grandsir opened the scoring for the French side, before Diego Costa equalized and Jose Gimenez struck the winner.

Substitute Christian Pulisic scored an 86th-minute winner for Borussia Dortmund in the other pool match at Club Brugge.

Schalke and Porto drew their opening Group D game in Germany, as Breel Embolo’s strike for the hosts was cancelled out by Otavio’s equalizer from the penalty spot.

Galatasaray saw off Lokomotiv Moscow in Istanbul thanks to goals from Mendes Rodrigues, Eren Derdiyok and Selcuk Inan.

Real Madrid, Bayern Munich, Juventus and both Manchester clubs are all in action on Wednesday.

Only Spending for criminals on Black Friday weekend is time