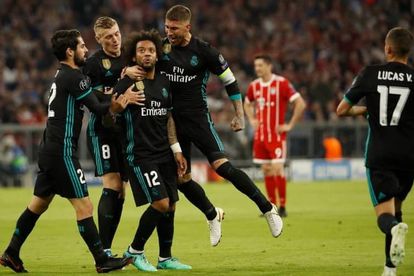 The reigning champions battled to a workmanlike 2-1 first leg victory at the Allianz Arena last week.

And they had to do it the hard way after slipping behind.

Joshua Kimmich burst through from the halfway line, surged down the right flank and deceived comedy keeper Keylor Navas at his near post with a confident finish.

Okay so he may have fluked it, but you can’t prove anything and we’re feeling generous.

Los Blancos pulled level out of nowhere when Dani Carvajal’s modest cross was allowed to bounce along the edge of the Bayern box.

The otherwise anonymous Cristiano Ronaldo left it for the rapidly arriving Marcelo, who drilled brilliantly into the bottom right-hand corner.

Worse was to follow at the back for the Germans after the break.

Rafinha’s baffling attempt at a cross-field pass went awry as he slipped over.

Lucas Vazquez seized the opportunity on the half way line and played in Marco Asensio, who finished calmly past exposed keeper Sven Ulreich.

The goals left Bayern hit man Robert Lewandowski cursing his profligacy at the other end.

It was also a night where the hosts lost two men to first half injuries in Arjen Robben and Jerome Boateng.

Septuagenarian boss Jupp Heynckes has the job of his long life to do if he’s going to fashion his fairy tale farewell.

Nacho is also suffering from a muscle strain.

Jerome Boateng is out for the rest of the campaign, thanks to his first leg injury.

Bayern are also sweating on the participation of David Alaba and Javi Martinez.

From Premier to MEC? Sihle Zikalala to head KZN COGTA