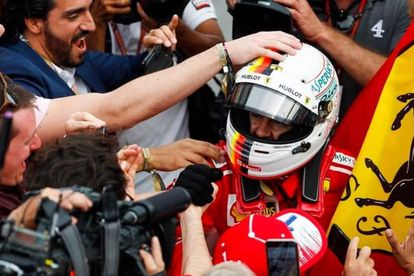 Ferrari’s Sebastian Vettel has taken his 50th career victory in Canada on Sunday in a race that he led from start to finish, becoming only the fourth driver in Formula 1 history to climb on the top step of the podium 50 times.

The four-times world champion also regained the championship lead from his Mercedes rival Lewis Hamilton, who only managed a fifth place at the power-critical Circuit Gilles Villeneuve in Montreal.

Vettel, who started on pole position for the 54th time in his career, retained his lead at the start, followed by Bottas, who started second.

While the leaders got away cleanly at the start, a high-speed collision on lap 1 between Torro Rosso’s Brendan and Williams driver Lance Stroll, running in the midfield, saw both cars retiring from the race. The incident brought out the safety car to allow marshals to clean up the debris and remove the stricken cars.

Racing resumed on lap 4 and Vettel soon pulled out a gap of close to six seconds over Bottas, who – in turn – stayed comfortably ahead of Verstappen.

Verstappen and Hamilton pitted on lap 17, changing from Ultrasoft tyres to Supersofts, while Ricciardo pitted a lap later.

Vettel and Bottas stayed out significantly longer, with the Mercedes driver finally pitting on lap 37 to take on fresh rubber and Vettel pitting a lap later.

During his second stint, Vettel easily controlled the pace and managed to maintain a gap of about five seconds over Bottas, who briefly chipped away at the Ferrari driver’s lead when Vettel encountered backmarkers.

However, the Fin’s charge was scuppered when he tried to lap the Renault of Carlos Sainz and ran wide, losing time to the leader. This allowed Vettel to stretch the gap to about eight seconds and he maintained a comfortable lead to the end of the race.

While Ferrari’s pace proved superior over the 70-lap Canadian Grand Prix, Mercedes felt that its chances of victory might be somewhat compromised as it was forced to delay a planned engine upgrade until the French Grand Prix in two weeks’ time, due to a quality issue discovered on Wednesday.

Hamilton’s low-key race meant that the reigning world champion did not manage to write himself into the history books this weekend as only the second driver to win a single event more than six times. A win for the Mercedes driver would have seen him match Michael Schumacher’s record of seven wins at the Montreal circuit.

It was also a bitterly disappointing end to Fernando Alonso’s 300th Grand Prix appearance as an exhaust problem forced the McLaren driver to park his car in the pits on lap 42. The Spaniard was running in 11th place.

Ferrari driver Kimi Raikkonen finished sixth, followed by the Renaults of Nico Hulkenberg and Carlos Sainz. Esteban Ocon took ninth place in his Force India, while the final point when to Charles Leclerc, who once again drove a brilliant race for Sauber.

Going into the eighth round of the championship, Vettel – on 121 points – leads Hamilton by a single point, followed by Bottas on 86 and Ricciardo on 84.