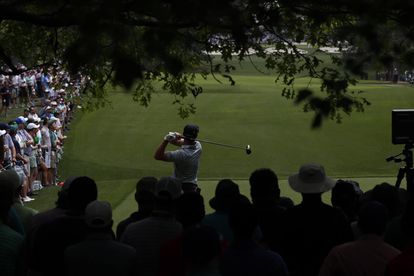 American Bryson DeChambeau aced the par-three 16th at Augusta National on Sunday in the final round of the Masters.

The hole-in-one was the 21st ever recorded in Masters tournament play at the 170-yard hole. It was a welcome bright spot for the 25-year-old American, who opened his round with back-to-back double bogeys at the 10th and 11th.

DeChambeau had made a promising start to his third Masters campaign on Thursday, sharing the first-round lead with Brooks Koepka.

But he fell off the pace with a second-round and followed up with a one-over 73 in the third round to find himself among the backmarkers teeing off on 10 as Augusta officials raced to finish the final round before severe weather was expected to roll in on Sunday afternoon.

And while DeChambeau was ecstatic, you won’t be hearing anyone shouting “get in the hole”. Augusta, the venue where the Masters is held, has very strict rules for those who attend. So much so that even those on commentary can only refer to them as “patrons”, not fans.

At the time of writing, Francesco Molinari was still leading at -13, followed closely by Brooks Koepka, Tiger Woods and Tony Finau, all on -11. South Africa’s Louis Oosthuizen was on -9 after four holes on the final day.

Can a director be removed by the shareholders without giving proper reasons?