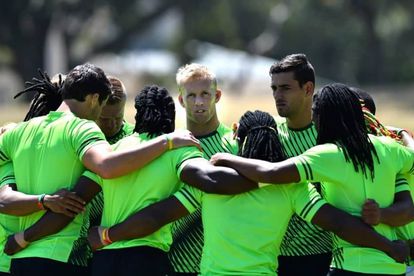 The Blitzboks started the 2016-17 season with a bang. They won the title in Dubai, beating Olympic gold medalists Fiji 26-14 in the final after a sensational showing in the group stages.

It’s hard to believe that the Blitzboks are managed by the same governing body as the Springboks. Their success and professionalism is in stark contrast to the flailing Boks.

It’s no wonder that every man and his dog are calling for the Springboks to emulate the Blitzboks. Writing a column for TimesLive, Venter highlights some of the differences between the two teams.

“For me, the fundamental difference between the Blitzboks and Springboks comes down to the desire to work for each other. If you sit down with [coach Neil] Powell, you will soon discover that he has created an environment in which the players want to work tirelessly for each other.

“The core test of professional sport is how you get people to work harder than others. Although everyone knows it, not everyone is able to achieve it. In my view, people function optimally when you sell them a vision and offer them guidance.

“Furthermore, successful teams rest on the pillars of people respecting each other, outlining precise objectives and measuring said objectives. I believe the sevens system can be used as a template to benefit the Springboks.”

Venter goes on to note the development plan in place for Sevens which has seen South Africa produce some of the best players on the circuit.

“It’s evident that the sevens programme has a well-functioning plan in place. (Neil) Powell and SA Academy head coach Marius Schoeman are getting it right in terms of player identification, conditioning, continuity and succession planning. The pair are very good friends and have found a winning formula.”

And, as many have pointed out, South Africa does not need to look overseas for solutions.

“The irony is that the Springboks have an example of an effective system right in front of their faces. We don’t have to look to England and New Zealand to discover best practice because we have a blueprint in our own backyard.”