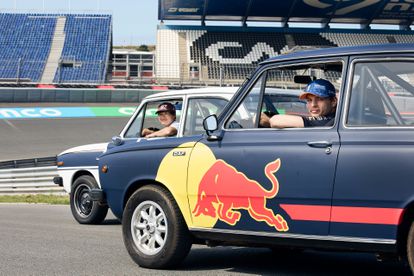 Formula One world champion Max Verstappen prepared for this home Grand Prix at Zandvoort with a hair-raising and very different showdown against Scuderia AlphaTauri’s Yuki Tsunoda.

The two drivers went head-to-head in reverse gear at a daunting 120kph.

Verstappen arrives at the Dutch circuit fresh off his superb Belgian Grand Prix victory last weekend where he started 14th on the grid at Spa and powered through the field to pick up another win and the fastest lap.

The Dutchman, who was born in Belgium, is now aiming for his 10th FIA Formula One World Championship victory in 2022 after extending his lead to 93 points over Oracle Red Bull Racing teammate Sergio Pérez.

Ahead of the penultimate European race of the current season, Verstappen joined Japanese pilot Tsunoda at Zandvoort for a unique track clash thanks to the wild and wacky world of reverse gear racing.

In the 1970s, local manufacturer DAF equipped their cars with CVT transmissions featuring just two gears – one forward and one reverse – allowing them to reach the same top speed in either direction.

The reverse race is not the first time that they have gone head-to-head in a different vehicle this season as Tsunoda triumphed when the duo raced Swamp Buggies on the water at Florida back in May.

For this latest 2022 showdown, when the flag dropped, the competition was furious as Verstappen grabbed pole position after Tsunoda’s ambition got the better of him and his DAF ended up against a wall.

Max Verstappen was also victorious in the race, expertly navigating a specially built course featuring a variety of obstacles as Tsunoda pushed the champion hard, but wobbled in the tricky Hugenholtz bend.

Verstappen, said: “I’d seen a few videos on YouTube beforehand and thought it’d be great fun to experience a reverse race first-hand. We had a lot of fun and I think it was a pretty steady performance. I’ve never driven that quick in reverse before, of course we all reverse now and then, but very slowly, so this was a new experience. The car can hit up to 120km per hour and goes just as fast in reverse. I think I’ll be sticking to forward racing for now. Time for our next challenge!”

Tsunoda, 22, added: “I’ve never experienced anything like that before, it’s definitely been a special event and I’ve had a lot of fun, despite the crash. It was great to be challenging Max again, after my victory in Swamp Buggy we’ve now got a win each, so we need to see what the next competition will be! But for now, we look ahead to the Grand Prix this weekend in Zandvoort, I enjoyed the track so much last year and can’t wait to get out there again. I love how much of a challenge all those banked turns pose, and the Dutch fans are amazing. I remember being sat on the grid la