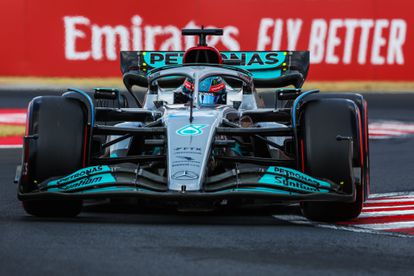 George Russell of Mercedes claimed his first pole position when topping the times in qualifying for the Hungarian Grand Prix on Saturday.

The British driver posted a sensational final flying lap to edge out Ferrari’s Carlos Sainz by only 0.044 to give Mercedes their first pole of the season.

Charles Leclerc in the other Ferrari and McLaren’s Lando Norris are on the second row for Sunday’s 13th round of the 22-race season.

Max Verstappen, who leads the world championship by 63 points from Leclerc, could manage only 10th after complaining over the Red Bull team radio that “nothing works” on his car.

On a trying day for Red Bull Sergio Perez came in 11th.

Last year’s surprise winner Esteban Ocon in contrast was celebrating finishing as high as fifth, with his Alpine team-mate Fernando Alonso in sixth.

Then came Lewis Hamilton in the second Mercedes ahead of Valtteri Bottas, in an Alfa Romeo, and the McLaren of Daniel Ricciardo, with a disgruntled Verstappen completing the top 10.