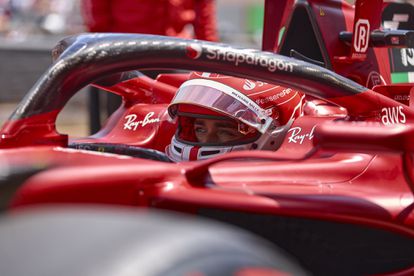 Charles Leclerc topped the times to take pole position for Ferrari at his home Monaco Grand Prix on Saturday after Red Bull’s Sergio Perez crashed on his final flying lap in a dramatic qualifying session.

The 24-year-old Monegasque driver emerged on top after a tense and dramatic session that saw his Ferrari team-mate Carlos Sainz qualify second to complete a one-two for the Italian team despite colliding with Perez’s car.

Perez, who was unhurt after slamming sideways into the barriers at Portier, finished up third on the grid ahead of his Red Bull team-mate world champion and series leader Max Verstappen.

It was Leclerc’s fifth pole of the season and the 14th of his career, an oft-decisive advantage at the tight and unforgiving barrier-lined street circuit where he has yet to finish a race.

Charles Leclerc clocked a best lap in one minute and 11.376 seconds to outpace Sainz by more than two-tenths in a scrappy end to an intriguing day’s action ahead of Sunday’s classic 78-lap race.

The session was red-flagged to a halt when Perez crashed, confirming Leclerc would take pole.

“It is very special for me,” said Charles Leclerc.

“I am so incredibly happy. It has been a very smooth weekend up to now.

“It went perfectly up until now and that last lap for me before the red flag was really, really good.”

The accident also revived memories of a similar incident last year when Leclerc claimed pole, but crashed and was unable to take part in the following day’s race.

Sainz said: “Checo (Perez) crashed in front of me on my flying lap. I saw the yellow flags just coming into Turn Eight and I had to hit the brakes to avoid him the best I could.”

Behind the Ferraris and Red Bulls, Lando Norris led the rest of the pack for McLaren taking fifth ahead of friend and fellow-Briton George Russell of Mercedes, two-time champion Fernando Alonso of Alpine and seven-time champion Lewis Hamilton of Mercedes.

Four-time champion Sebastian Vettel was ninth for Aston Martin ahead of Esteban Ocon in the second Aston Martin.

Alonso also survived a late crash unscathed as the teams checked weather forecasts carefully with rain expected to sweep into the Mediterranean principality on Sunday.

Norris was first out in the first qualifying session of the season’s most famous qualifying hour, his time quickly beaten by Hamilton before Verstappen went top.

The track was clearly evolving in slightly changed conditions with clouds and cooler weather prevailing. The air temperature was 25 degrees and track 47, having been 52 for final practice.

“I have no grip whatsoever,” reported Russell on team radio, a complaint reflecting a general early struggle before tyres warmed and grip improved.

He persevered as Ferrari swept to the top with Leclerc leading Sainz before a late red flag halted the action when Alfa Romeo’s Guanyu Zhou clipped a barrier at the ‘Nouvelle’ chicane, suffering a puncture.

Only four minutes remained, just time enough for another flying lap, but not sufficient for Hamilton, Bottas, Pierre Gasly or Zhou, the only rookie in the field, who missed their opportunities in a frantic finish.

Out in a stream of profanities went Williams’ Alex Albon, Gasly of Alpha Tauri, Aston Martin’s Lance Stroll, Nicholas Latifi in the second Williams and Zhou. It was the first time Gasly had failed to progress from Q3 in Monaco.

The second session began promptly, the debris from Zhou’s puncture cleared away, with Perez taking the early initiative ahead of the Ferraris and Verstappen fourth. Leclerc responded to take control at the top, but then missed a weighbridge signal and had to be pushed back by his crew in the pitlane.

In another busy finale, Vettel produced a lap to lift him into the top 10 along with Hamilton, but out went Alpha Tauri’s Yuki Tsunoda, Valtteri Bottas of Alfa Romeo, Kevin Magnussen and his Haas team-mate Mick Schumacher, along with McLaren’s under-pressure driver Daniel Ricciardo.

Charles Leclerc had no concerns

Leclerc, however, showed no such concerns as he set the pace again in the top-ten shootout with a stunning lap,  two-tenths faster than Sainz with Perez edging Verstappen for third.

It was untouchable on the first runs as Alonso took fifth ahead of Norris and the two Mercedes before the final dramatic flurry, on new soft tyres, to decide the grid.