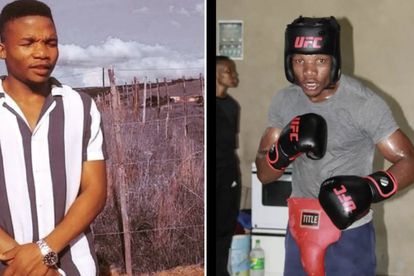 Buthelezi was involved in a shocking incident during a recent bout, with footage showing the talented boxer strangely starting to shadowbox in the corner of the ring, and with his back turned to his opponent.

In the fight against Siphesihle Mntungwa in Greyville, Buthelezi doesn’t appear to have suffered a heavy blow before the incident, but inexplicably goes on to lose his bearings before the bout was quickly called off.

It was later reported that he had been placed in an induced coma in a Durban hospital following the World Boxing Federation All Africa Lightweight fight.

Doctors said they believed there could be a blood clot on the brain due to a blow to the head, presumably suffered at some point during the bout, or possibly in the past.

Sadly, it was later confirmed that he had passed away.

“It is with great sadness for Boxing South Africa and the Buthelezi family to announce the passing away of Mr. Simiso Buthelezi who passed away last night the 7th June 2022 at hospital in Durban,” read a statement.

“The Buthelezi family and Boxing South Africa acknowledges warm words of condolences of the Minister of Sport, Arts and Culture.

Mntungwa has since spoken about the death threats he received after being blamed by some for the tragedy, while admitting he even had suicidal thoughts.

“It hurts me because somebody has just passed away because of me. I am blaming myself for taking the fight, signing the contract. If I knew before what going to happen, I swear to God I’d not accept the fight,” Mntungwa told the Boxing Social website.

“I’m so heartbroken – even today – I can’t even fake a smile. It meant a lot to me [this fight] because it was one of my dreams to become a champion, and I’ve made that dream become true. But even now, I haven’t celebrated for the win because of my opponent Simiso; he was injured during the fight, so, I’ve just been hoping that he’d recover very fast. Unfortunately, he couldn’t. That’s the sad part because it wasn’t my intention to take his life; we both wanted to become champions that day.

Tributes have flooded in for the young boxer: