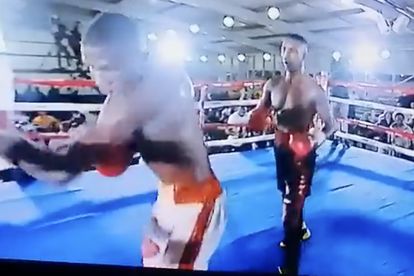 The incident occurred during a bout this past weekend, with footage showing talented boxer Buthelezi strangely starting to shadowbox in the corner of the ring, and with his back turned to his opponent.

It’s since been reported that Buthelezi has been placed in an induced coma in a Durban hospital following the World Boxing Federation All Africa Lightweight fight.

The latest update suggests that doctors believe there could be a blood clot on the brain due to a blow to the head, presumably suffered at some point during the bout.

“He is not in a good health condition at all, he is critical but stable,” doctor Buyi Mabaso-Dlamini told Sowetan Live on Tuesday. “We discovered that he bled on the brain and sadly his condition does not allow the doctors that are treating to operate at the moment due to the condition.”

“Another suspicion is that he may have suffered an injury before Sunday’s fight,” said Mabaso-Dlamini. “It could be injuries building up all the years. His condition deteriorated when he was rushed to the hospital. But he was worse on his arrival at the hospital than when he left Greyville. We trust in God that a miracle can still happen.”

His trainer Bheki Mngomezulu said the incident was quite inexplicable.