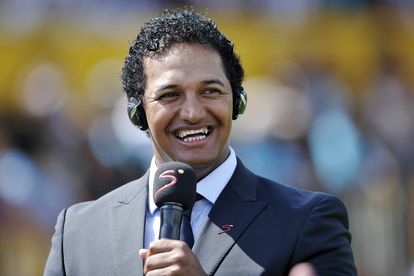 Springbok legend Breyton Paulse was given the honour of carrying the SA flag ahead of Saturday’s third and final Springboks v Wales Test. Photo:
Wilkisky/BackpagePix

Springbok legend Breyton Paulse was given the honour of carrying the SA flag ahead of Saturday’s third and final Springboks v Wales Test. Photo:
Wilkisky/BackpagePix

The tragic news came to light late on Sunday, with a report by Netwerk24 stating that two people had been found floating in the water near the Old Harbour in Hermanus, a picturesque coastal town in the Western Cape.

The article states that Paulse – who played 64 Tests for the Springboks – confirmed the tragic news, writing in a WhatsApp: “It is very sad. Pray for me and my family!“

NSRI Hermanus station commander Andre Barnard said a team was dispatched after eye-witness reports of two people appearing to be lifeless, floating in the ocean.

“While responding, additional calls were being received of two women washed off the old harbour wall by waves at the Hermanus Old Harbour.

“CPR (Cardio Pulmonary Resuscitation) efforts commenced. They were brought to the NSRI rescue station, where CPR was continued by paramedics.

“Sadly, after all the efforts to resuscitate the two women were exhausted, they were declared deceased by paramedics.”

Barnard said the bodies of the two sisters, aged 60 and 62, from Ceres, had been taken into the care of Government Health Forensic Pathology Services.

Tributes have poured in for the Paulse family

On social media, former Springbok Toks van der Linde said that he was “broken”, and sent condolences to Paulse, saying: “You know how much I loved your mum and she was your idol!”

Paulse had one of the most decorated careers in South African rugby history. When he hung up his boots after the 33-6 loss to the All Blacks in Christchurch on July 14, 2007, he had won 64 Test caps – and scored 26 tries – then fourth on the all-time Springbok list.

He was a member of the 1999 World Cup squad and received the honour of being named the SA Player of the Year in 2000. He played in his second World Cup in 2003 and helped the Springboks win their second Tri-Nations title in 2004.

The following year, he moved to France where he took up a contract with Clermont but continued to play for the Boks as South Africa had abandoned their policy of excluded overseas-based players from national selection at the time.

The small, electrifying winger scored a hat-trick on his senior debut for Western Province in 1996 where he played the majority of his provincial career bar the one-year stint at Clermont. His elusive running and trademark flip after crossing the whitewash made him a huge crowd favourite. He remains one of the Stormers’ most beloved sons.

RATINGS: Will Elton Jantjies have a shot at redemption with Springboks?