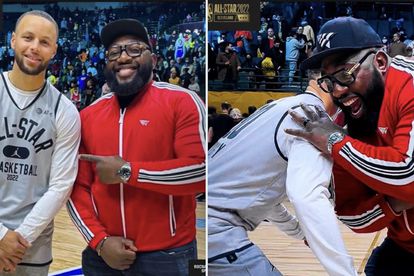 Beast Mtawarira retired after the 2019 Rugby World Cup, and he has repeatedly revealed how he is a massive fan of NBA basketball, regularly making trips to the USA.

This past weekend, images and videos have now emerged to show him looking star-struck as he met the legendary Stephen Curry, even scrumming down with the Warriors guard at one point.

Taking to social media, Beast admitted the encounter was “still sinking in”.

You can see the interaction between Beast and Curry below:

Meanwhile, Beast Mtawarira recently said he was proud of the way Rassie Erasmus stood up to World Rugby by producing his now infamous referee analysis video.

Speaking on The Good, The Bad & The Rugby podcast, Mtawarira – who retired after the 2019 World Cup – said he had watched the video repeatedly and was happy Erasmus had produced it.

“That was a masterclass,” Mtawarira commented with a laugh. “It was factual, and I think it influenced the series in a big way. I must say, I wasn’t happy with the officiating in that first Test match.

“I understand the process of what happened after that, getting feedback from a referee in terms of scrums, if we get a few penalties we go ask, ‘What did we do wrong?’

“For Nic Berry to take so long, it’s got a big impact on selection. When you don’t give feedback in good time saying why we penalised you, why you didn’t get that 50-50 call, it hampers what you want to achieve.

“That’s what was frustrating, so I understand it from Rassie’s and Jacques Nienaber’s point of view. They wanted to select a team that will play to those strengths and not give penalties at the wrong time.”

In the second Test of the series, it certainly seemed that the focus placed on officiating worked in favour of the Boks, with the home side ultimately going on to claim a 2-1 series win.

“It was probably one of those videos I watched back-to-back a few times,” Mtawarira added.

“I was proud of him for saying that. You’re standing up against a big organisation like World Rugby.

“It can have a negative impact on you, but he took it up and personally called the officiating out, and in the end, it played a massive role, and the refs are paying more attention now.

US approves $10 billion sale of Himars rocket launchers to Poland

WATCH: Here is what you can expect on Thursday [Video]

Beyoncé is going on a world tour: Africa included